Marriage Equality Is Not About Sex

“For as long as I can remember, I wanted to be a lawyer.”
– David Allen

I really like this guy. David Allen has practiced law since 1980. It’s not often that I like watching videos when the person is only talking, but attorney Allen is different. He is animated in his voice and physically. His videos are interesting and I’m thinking about presenting one at least once a week.

In the one below, attorney Allen tells the story of a committed same-sex couple relationship of 19 years, and how there were no options at law when the couple decided to end their relationship. END_OF_DOCUMENT_TOKEN_TO_BE_REPLACED

I suppose that the overall goal to issue marriage licenses to same-sex couples has been obtained. That’s the only good that comes out of this.

Kim Davis, the anti-gay Kentucky clerk that was jailed last week for repeatedly disobeying court orders to issue marriage licenses to same-sex couples, has just been released from jail.

U.S. District Court Judge David Bunning ordered Davis to be released on Tuesday, but only with the understanding that she is not to interfere with same-sex marriage licenses any longer. According to reporter Dave Weigel, there was the sense that the defiant clerk may opt to stay in jail.

Davis’ release became an option after the staff at her Rowan County office began issuing marriage licenses to gay and lesbian couples, and at the request of the plaintiffs that sued her. Judge Bunning agreed to her release, now that her office was doing its job – but Davis is not to meddle in same-sex marriage licenses once she’s out of prison. The court order said:

“Defendant Davis shall be released from… 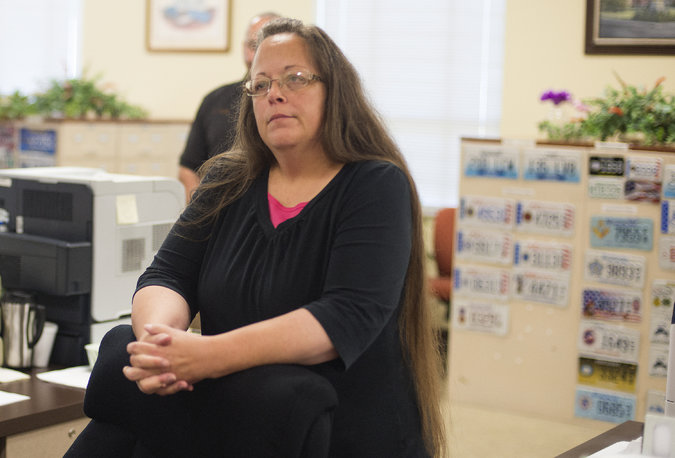 The Week In Review – Open Discussion

What a busy week this has been.

The Supreme Court of the United States has made marriage equality the law of the land.  Within hours of the decision, Texas Attorney General Ken Paxton issued a statement directly challenging the decision for instigating a battle over “religious liberty.”

Way to Go! What took America so long?

Social Justice For All

NOM demanded that the Supreme Court issue a stay on McShane’s ruling while they desperately scrambled to find a way to reverse it. The petition went to Justice Anthony Kennedy, who presides over such matters for the region that includes Oregon. Kennedy requested briefs from NOM, the plaintiffs who won McShane’s decision and the state of Oregon. After those briefs were filed on Tuesday, the Justice referred the matter to the entire Supreme Court.

The full Court responded with a clear “go away!” message to NOM.

The application for  stay presented to Justice Kennedy and by him referred to the Court is denied.