Family of Jeremy McDole Who Was Killed By Wilmington, Delaware Police Settles for $1.5 Million.

Hat tip to Black Freedom @Freedom4Blks on Twitter for reminding me about this case.  It inspired me to write this follow-up.

On September 26, 2015, I blogged on the shooting of Jeremy McDole in Wilmington, Delaware.  Jeremy was partially paralyzed and in a wheelchair.

A call to 911 reported that Jeremy had wounded himself with a gun. Further investigation found that there was gunshot residue on Jeremy’s hands.  While wounded and confined to his wheelchair, Jeremy was shot by officers 16 times.

The arrival and subsequent actions by four police officers were caught on cell phone video. The video was considered in the investigation into the officers’ use of deadly force.

The video showed Jeremy McDole rubbing his knees as Senior Cpl. Joseph Dellose and three other officers – identified in the report as Senior Cpl. Danny Silva, Cpl. Thomas Lynch and Cpl. James MacColl, moved into the open, without cover.

The investigative report found that Dellose fired at Jeremy  approximately two seconds after initially ordering him to show his hands, creating uncertainty among other officers who, not knowing where the gunfire came from, also turned their weapons on McDole. END_OF_DOCUMENT_TOKEN_TO_BE_REPLACED

Paralyzed Man In Wheelchair Gunned Down By Police 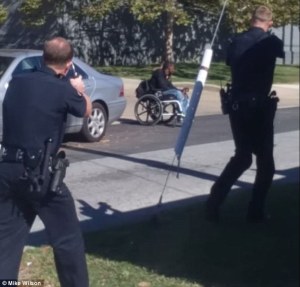 Jeremy McDole was shot in the back and paralyzed when he was 18 years old. He was confined to a wheelchair and living in a nursing home in Wilmington, Delaware. On Wednesday, 10 years after the bullet that paralyzed him, and in his wheelchair, Jeremy was shot again. He was shot to death by police officers who arrived in response to a call of a man who had a possible self-inflicted gunshot wound.

A bystander caught the incident on cellphone camera.

The incident is being investigated by officials from the Delaware Department of Justice’s Office of Civil Rights and Public Trust. That department reviews every incident that involves a police shooting resulting in injury or death. The 4 officers involved in the shooting have been placed on administrative leave.

The police have released few details, saying that Jeremy had a handgun when he was killed by the police. There are many unanswered questions. END_OF_DOCUMENT_TOKEN_TO_BE_REPLACED