Heather Heyer, was killed when a Dodge Charger, allegedly driven by James Alex Fields, a self-identified white supremacist, plowed through a crowd of counter-protesters.  Heyer was attending an Alt-White Rally, protesting the removal of a confederate statue in Charlottesville, Virginia.  She was a counter-protester when she was murdered. 20 others were severely injured. Heyer, was a paralegal at the The Miller Law Group, also in Charlottesville.  According to their website,

Heather Heyer is one of our Paralegals here at Miller Law Group and continues to be an irreplaceable asset to our firm. Heather was born and raised in the beautiful state of Virginia. Originally from Ruckersville, VA, Heather now resides here in Charlottesville.

After being struck, Heyer was transported to UVA Hospital, where she was pronounced deceased.

“died standing up against hate & bigotry.”

Violent clashes between white nationalists and counterprotesters in Charlottesville

I hear David Duke say that the protests were to take “our” country back. Back from what? That question has not been answered.

CHARLOTTESVILLE – Hours before a noon rally was set to begin Saturday, violent skirmishes broke out between bands of white supremacists and counterprotesters who have converged on this college town around the issue of a Confederate statue.

Men in combat gear, some wearing bicycle and motorcycle helmets and carrying clubs and sticks and makeshift shields fought each other in the downtown streets, with little apparent police interference. Both sides sprayed each other with chemical irritants and plastic bottles were hurled through the air.

A large contingent of Charlottesville and Virginia state police in riot gear were stationed on side streets and at nearby barricades but did nothing to break up the melee.

Further reading:  Who Are the Alt-Right Leaders Behind Virginia Rally?

Desegregation of West End High School in Birmingham, AL was initiated in September of 1963. Patricia Marcus, shown in the following AP wire photo, was one of the two Black students enrolled there that September. The photograph is captioned with these words:

“Birmingham, ALA., Sept. 11—CAR WINDOW SMASHED—One of two Negro girl students who desegregated West End High School in Birmingham sits in car and is partially framed by broken auto window. A rock was hurled through the window as the Negro girls were leaving the school area after class this afternoon. (APWirephoto) 1963”

As I look at this September 11, 1963,  photo of Patricia Marcus, I see a student who just wants to make it home safely after a thrown rock has shattered the window where she sits. Yet, at the same time, I see her in her eyes her strength and determination amidst what must have been hurt, anger, and shock. Associated with the hateful deed just committed against her is the Confederate flag in the left foreground.  Historically that symbol has appeared, all too often, at the scenes where racial violence has been committed.  All too often it announces the presence of hearts starved of compassion, open-mindedness, and understanding because of white supremacist indoctrination. END_OF_DOCUMENT_TOKEN_TO_BE_REPLACED

What Would America Be Today Had The South Won The Civil War?

Years ago, I found a bargain book titled “The Complete Idiot’s Guide To American Heroes.” (Please, don’t laugh. Okay. Go ahead and laugh.) Under “Strange Encounters of the Heroic Kind” is the note that George Washington and Betsy Ross sat in adjacent pews at church. The other night as I was going through the book and read that part, I wondered about the “customs” claimed by those who still hold onto the Confederate battle flag. That led to the question, what would America be today had the South won the Civil War?

Would we have the inventions and research of people of color, including Native Americans that have benefited not only America, but mankind as a whole? What about music, literature, movies? What about the result of wars, especially World War II with the participation of the Tuskegee Airmen and Navajo “code talkers”?

This is open for discussion. I would very much like to hear your opinions, and any contributions that have helped make America great, and that would have been impossible, or hindered had the Confederacy won the Civil War. 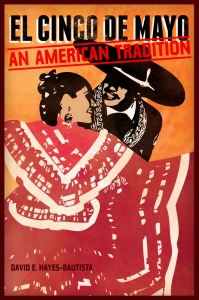 A little more than a year ago my wife gave me a book titled “El Cinco De Mayo an American Tradition.” The author is Dr. David Hayes-Bautista.  I could not put the book down. The history contained on its pages was nearly lost.  It is my belief that the historical facts behind Cinco De Mayo were intended to be lost.

With the current race for the White House, and a few of the Republican front-runners who have shown disdain for Mexican-American people,  I thought it might be best to share these historical facts.

El Cinco De Mayo has been mistaken by many as a celebration of Mexican independence, but it is not.  It is associated with a battle won in Mexico that had it been lost, might have changed the outcome of the American Civil War.

I hope that you enjoy the video.

It started with the press announcing that George Zimmerman did a painting of the confederate flag because a Florida gun shop owner is being sued. Zimmerman wants to sell prints of the painting and split the money with the gun shop owner.

Twenty-eight year old Andy Halliman, owner of Florida Gun Supply in Inverness, Florida, is being sued by the Council on American-Islamic Relations, (CAIR).

Hallinan calls himself a “patriot” and thinks that his unlawful discrimination protects America.   Previously, Hallinan allowed American-Muslims customers to take his gun safety course and purchase from him if they told him they had served the country and didn’t believe in the caliphate or in killing non-believers. He made them take an oath. END_OF_DOCUMENT_TOKEN_TO_BE_REPLACED

So, he paints a Confederate flag over an American flag that he painted. That speaks volumes.

CREDIT: JOE BURBANK/ORLANDO SENTINEL/ASSOCIATED PRESS In this July 9, 2013, file photo, George Zimmerman leaves the courtroom for a lunch break during his trial in Seminole Circuit Court, in Sanford, Florida.

George Zimmerman, who rose to national notoriety in 2012 after shooting and killing unarmed black teenager Trayvon Martin, is now selling prints of a Confederate flag painting, in part to benefit a Florida gun store owner who is facing a lawsuit after declaring his business “Muslim-free.”

The prints — copies of an original work hand-painted by Zimmerman — are available for about $50 each at Florida Gun Supply in the city of Inverness. Andy Hallinan, the store’s owner, declared his store a “Muslim-free” zone in a July YouTube video, on the grounds that he did not want to “arm and train those who wish to do harm to my fellow patriots.”

The Council on American-Islamic…

If nothing else, it’s a crime of vandalism, the same as anyone would feel having someone put animal ca-ca on their front porch.

What’s good Blackbutterfly7? Santiago here,  checking in with an any topic discussion thread.  Feel free to share your thoughts as to recent events that may or may not have been covered by us recently.

As for myself, it’s been a pretty busy week.  Our house has sold and we will be moving out by the end of August. Court took place this week.  The defendant entered a plea of not guilty  Trial is set for September 8th.

My Soap Box For Today

South Carolina finally did what should have been done years ago in taking down the Confederate Flag.  (Really, it should have never been flown after the Civil War.) The flag’s removal has caused some to go off the deep end with their arguments that the flag does not represent oppression and bigotry, but rather their history and southern pride.

As slanted as those claims might be, here is what that flag represents to me. END_OF_DOCUMENT_TOKEN_TO_BE_REPLACED

EDITOR’S NOTE: Over the weekend, a young freedom fighter and community organizer mounted an awe-inspiring campaign to bring down the Confederate battle flag. Brittany “Bree” Newsome, in a courageous act of civil disobedience, scaled a metal pole using a climbing harness, to remove the flag from the grounds of the South Carolina state capitol. Her long dread locks danced in the wind as she descended to the ground while quoting scripture. She refused law enforcement commands to end her mission and was immediately arrested along with ally James Ian Tyson, who is also from Charlotte, North Carolina.

Earlier this week, social justice activist and blogger Shaun King offered a “bounty” on the flag and offered to pay any necessary bail bond fees. Newsome declined the cash reward, asking that all proceeds go to funds supporting victims of the Charleston church massacre. Social media users raised more than $75,000 to fund legal…

Tags: Bree Newsome, confederate flag, statement, take it down, why she did it

The Week In Review – Open Discussion

What a busy week this has been.

The Supreme Court of the United States has made marriage equality the law of the land.  Within hours of the decision, Texas Attorney General Ken Paxton issued a statement directly challenging the decision for instigating a battle over “religious liberty.”

The Stars and Bars…