Very detailed and well written. Thanks so much for keeping us informed.

If you read nothing else this week, please make sure to read this.

LAPD Newton Division’s “Gang Enforcement Detail” Officers Sharlton K. Wampler and Antonio Villegas are the cops responsible for shooting Ezell Ford to death in South Los Angeles last month, according to a press release from the Los Angeles Police Department. The release of the names comes a full two weeks after the two cops shot and killed the unarmed 25 year-old in his own neighborhood as he laid on the ground on August 11, even as he complied with the officers’ demands. Much like Darren Wilson – the Ferguson cop who murdered Michael Brown (another unarmed young Black man gunned down by cops in his own neighborhood) – Wampler and Villegas were likely given the chance to flee and go into hiding. Also like Wilson, both officers are now on paid vacation. 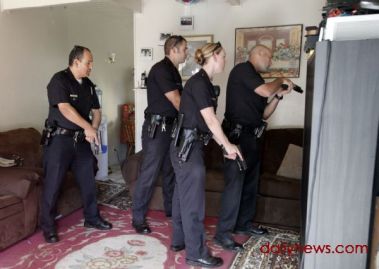 A picture of an LAPD “gang enforcement”detail.