After Stealing My Word Press Identity, Former Writer Threatens To Have This Blog “Shutdown”

I’m cross-posting here from the flightattendant blog because the threat made by Santiago Rodriguez pertains to this blog.

Santiago Came To Me Asking For Help

Subsequently, Santiago asked that I put his name on the border of my blog, We Hold These Truths To Be Self-Evident, as a writer.   This is how it happened …

END_OF_DOCUMENT_TOKEN_TO_BE_REPLACED

A Texas couple, Mark Lesher, 63, and his wife, Rhonda, 50, were accused by a woman of sexual assault. Mark Lesher is a prominent attorney, and Rhonda was running a successful day spa. The accusation included a man who works on the Lesher’s ranch.   Before they stood trial in January 2009, there was a steady stream of attacks on the Web forum Topix.com.   The comments accused the couple of murder, encouraging pedophilia, drug abuse and other crimes that materially attack their characters.

In January 2009, the couple and their ranch hand were found not guilty on all charges.

Three years ago, the couple filed a 365-page lawsuit naming 178 pseudonyms used to post what they considered the most defamatory messages. They posted the lawsuit on Topix and served the company a subpoena to obtain the IP addresses. A Texas judge ordered Topix to turn over the identifying information about the anonymous posters. The Internet Protocol (IP) addresses led to a couple that owned a business, and accused the Lesher’s of sexual assault in 2008.

In July 2009, the Leshers filed an amended petition in the District Court of Tarrant County, Texas naming Shannon Coyel, the couple’s accuser; her husband Gerald Covel and his brother, James Coyel. Also named as a defendant was Apache Truck & Van Parts of Kennedale, Texas and two of its employers, Charlie and Pat Doescher.

Mark and Rhonda Lesher stand on the steps of Collin County Courthouse in McKinney, Texas, shortly after their acquittal of sexual assault charges Jan. 16, 2009.

On Friday, a jury awarded the Leshers a judgment of $13.78 million.

Mark and Rhonda Lesher stand on the steps of Collin County Courthouse in McKinney, Texas, shortly after their acquittal of sexual assault charges Jan. 16, 2009. On Friday, the couple were awarded

The Gazette reported a malicious prosecution suit is pending that names as defendants the Coyels and Red River County District Attorney Val Varley, who unsuccessfully prosecuted the sexual assault case against the Leshers. That suit accuses them of conspiring to convict the Leshers of a crime they did not commit. The newspaper reports that a jury trial is scheduled for August.

Ryan Calo, who teaches privacy law at Stanford Law School and is joining the faculty at the University of Washington School of Law, said

“Defamation is one area of law in which a jury or court have to figure out how much damage has been done. It’s not a car accident where you can calculate medical bills and how much work was lost after an injury. There’s something more ephemeral in a reputation.”

There is a difference between free speech, which states an opinion, and accusations stated as fact that have no basis in fact and causes harm to the personal lives of others.

There’s more on this story and other internet defamation stories on ABC News.

END_OF_DOCUMENT_TOKEN_TO_BE_REPLACED

(Alert.  Some might find the content in the comments of others presented in this article to be offensive.)

Five words I would hear on a regular basis day in and day out when training as an amateur boxer; “Protect yourself at all times.” You hear those words time and time again in the gym, even while hitting heavy bags or doing mitt work. It’s important even during sparring although those sessions are controlled and not as intense as an actual fight.

The idea is to instill that way of thinking into your head so you keep your hands up, keep your head moving and your feet moving, thus reducing the chance of getting caught with a shot you don’t see only to deposit you on the canvas.

It’s the last set of words you hear after having passed the ammunition to your opponent (Touching Gloves) and just before the opening bell sounds.

What do I mean in all of this? Lets look back when the internet started to surface and started to become the trend that it is today.

If you were a parent back then or even a single lady living alone, the internet was a place where you knew trouble lurked. You didn’t want your kids on the internet because you have prowlers trying to lure your kids to meet them. You have scam artists setting up websites in attempt to look legit but are intended to get your personal info and steal your identity or clean out your bank account. These are things we are all aware of and we all keep our guard up in regards to these types of realities. But I am going to take it even one step further. How many of you have surfed Youtube only to see some crazy conspiracy theories in the videos? I am pretty sure everybody here has stumbled across them on a couple of occasions.

The disturbing part is the creators of the videos; the creators of those theories, believe in them so much that if you even utter a word disagreeing they tend to claim your hired by the Government sent out to discredit truth seekers. Or am I the only one who happens to find Youtube users like that? Don’t take my word for it. Look up some of the Planet X theorist and try to debate reality with their warped sense of thinking and see what happens.

Anyhow, I have seen some crazy stuff surfing. There are videos where anti-Obama nutters claim that the Aurora shooting, Sandy Hook and even the Trayvon Martin shooting never took place. They claim that these were all paid actors and one huge effort to take away our 2nd amendment rights. END_OF_DOCUMENT_TOKEN_TO_BE_REPLACED

Cyberharasser’s Court Action Backfires On Him 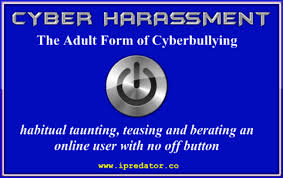 Most of you who read this will know the experiences I am about to share with you as some of you reading have also been victimized by this individual. I am not sure exactly when the subject person started harassing others, but my point of reference starts with the George Zimmerman Trial.

I’m referring to the individual as my accuser.   It never occurred to me that by exercising my right to freedom of speech, that a series of events would lead to being threatened, stalked, harassed, defamed, and eventually led to court. But, this is what happened and it happened as a result of my advocacy for Trayvon Martin.

During the Zimmerman trial, I became familiar with an individual over social media. I had blocked several of his twitter and Facebook accounts due to the racist comments, racist memes and threats of violence. As time went on and the verdict was announced, and in protesting the verdict, the subject harasser stepped up the memes. They were more disturbing as if this was his method of a victory parade essentially rubbing salt in the wounds.

But that was expected. I mean when you look at the blatant racism in his memes, in his tweets and on his Facebook pages, who would not expect anything different. His postings make it that he a person who believes in white supremacy ideology. END_OF_DOCUMENT_TOKEN_TO_BE_REPLACED