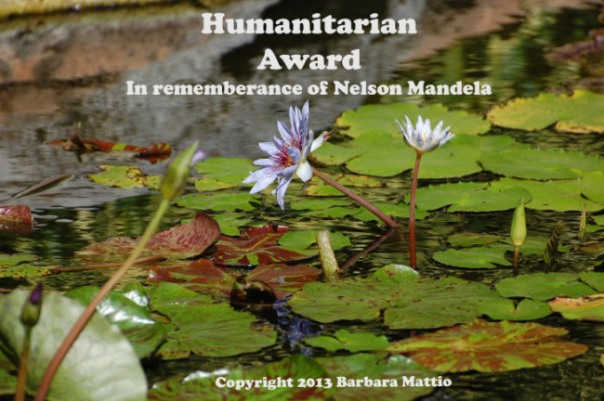 This award was created by IDEALISTIC REBEL.

He was awarded the Nobel Peace Prize in 1993 and has received over 250 other awards for his contributions to South African politics and for his influence on other oppressed societies.

Blackbutterfly7 was presented with this award by Dr. Rex (Horty), who wrote upon presenting it:

“The responsibilities that go with this award are to continue showing your Love for the Human Family encompassing all without regards for differences.”

Horty, it’s an honor and I promise not to let you down.

1. To be eligible for this award, a blogger must blog about the importance of One World, One Family of Mankind, and One Love.

2. Recipients should Nominate 5 people who have demonstrated through their writing a love of the Human Family that encompasses all without regard for differences.
3. Give credit and thanks to the person who passes the award to you.

I hereby present the Humanitarian Award in Remembrance of Nelson Mandela to:

Praying For One Day