“Shut up, slave.”  “”Your children are disposable vermin!” “Get on all fours! Do not walk off on two legs!”  That and more was said by 24-year old William Boucher back on June 6, 2017 in an altercation in a downtown Chicago Starbucks. 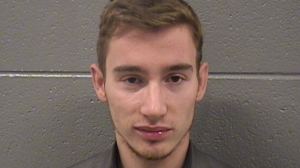 Boucher was all talk while inside the Starbucks but after he walked outside, he started actions that included spitting on a Black man.  As Boucher walked further down the street, he sucker punched an innocent 59-year old Black man who was walking down the sidewalk. The man was taken to the hospital for injury to his eye.

Boucher got his wish for a Black man to “get on all fours” because one straddled Boucher, holding him down while they waited for the police.

The altercation allegedly started in Starbucks when someone spilled coffee on Boucher’s pants. Video that was captured did not start until Boucher began his racial rant.

According to the Cook County State’s Attorney office and court records, Boucher was originally charged with misdemeanor battery. In August, a judge issued a no-bond arrest warrant for four felony hate crime charges and four felony aggravated battery charges against Boucher.  Boucher surrendered to Chicago police at the Central District Police Station on Friday and was booked into Cook County jail Saturday.  His bail is $50,000. He has since been released.

The Chicago Tribune reports that the man who Boucher spat on is Gerald Mitchell.  Gerald told the Chicago Sun-Times newspaper in July that he hoped the belligerent man learned something from the experience.

“I try to see the good in people,” Mitchell told the newspaper. “I don’t know his background. I would try to give him the benefit of the doubt. I just know it was downright wrong. Disgusting.”