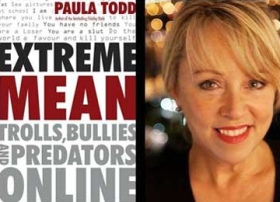 The other week, I was watching the Steve Harvey show and Paula Todd was a guest on his program. Paula Todd is a Canadian journalist, investigative author, broadcaster, and lawyer. She is a professor of broadcast journalism and digital media at Seneca College, and is a frequent speaker on cyberabuse, Internet culture, writing, reporting, literacy and freedom of the press. In 2014, she published the book, Extreme Mean: Trolls, Bullies and Predators Online.

An introduction of her book starts with;

For those who have Word Press blogs, you know that we can see referrals to our blog from other sites and emails. I don’t always check that section on the Admin side, but when I saw a significant increase in the number of views one day, I did check. 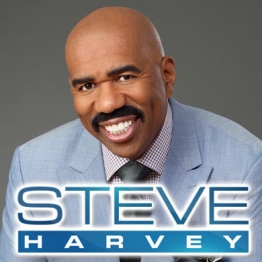 Steve Harvey’s website linked to an article on Blackbutterfly7. Words cannot express how honored I was. Of all the sites on the internet that reported on the particular subject matter, Blackbutterfly7 was chosen. I didn’t publicly share that information. Why? Because for years, cyberextortionists stalk the internet looking for opportunity to disparage this blog and defame me. I did not want them trying to verbally vandalize Steve Harvey’s website and taking up the time of his staff to moderate their defamatory vileness.

You might already know that I use the word “cyberextortionists” rather than cyberharassers because they threatened me with defamation unless I delete this blog.

Paula Todd has coined a better description – “cyberabusers.”  According to Paula, based on her research, cyberabusers are not happy in their own lives. They intentionally seek to inflict harm on others.  There’s no reasoning with them.

The timing of the Steve Harvey show was perfect. Last year around this time, a certain individual who we have come to call “Mr. Stalker” filed for a restraining order against Santiago. Santiago writes for this blog.

In general, courts grant temporary restraining orders, and schedule a hearing giving the respondent opportunity to come to court to challenge the allegations. Before the scheduled hearing however, Mr. Stalker sent a comment to this blog informing me that he had obtained a temporary restraining order and I should get familiar with the Word Press delete button or he would do the same to me. He followed that by filing malicious copyright infringement complaints against this blog – not because copyright was infringed, but in effort to have Word Press take down this blog.

The court denied Mr. Stalker’s petition for a plenary restraining order, and he went ballistic on Santiago. Mr. Stalker carried his actions beyond the internet and along with Santiago, doxed Santiago’s wife and children and posted their personal information on the internet, misrepresenting the content. Santiago used his legal options, went to court, proved his case, and was granted a 3-year restraining order against Mr. Stalker. 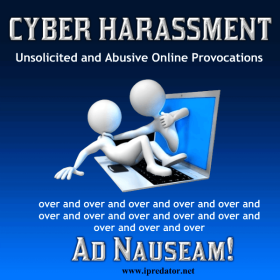 That however, did not stop Mr. Stalker. He engaged the help of others and had them post demeaning and defamatory material on their websites and sent the link to one site to Santiago’s wife’s employer so they could see the type of man she is married to. Yes, they threatened her employment and went as far to boast that because it’s on the internet, all of her future potential employers could read their defamation. Santiago’s wife is an accomplished professional, a college professor, and someone who I don’t think has ever spoken nor written an abusive word to anyone in her life.

The situation involves two different law enforcement jurisdictions, so reporting Mr. Stalker’s violations of the restraining order was like going in a vicious circle. That compelled Santiago to seek the court to hold Mr. Stalker in contempt. That was in January of this year.

Since Mr. Stalker’s income is disability, he was appointed an attorney at the cost of taxpayers. Santiago however, is paying a private lawyer.

(As a side note, those perpetrating the violation of civil rights under the guise that they are protecting the country from the “Black grievance industry” have stated that their agenda is to take away the money of their target victims. What they are doing to Santiago is an effort to accomplish that agenda. Also, those perpetrating this agenda are not gainfully employed and have nothing to lose.)

Mr. Stalker is an admitted Sovereign Citizen, (see his comment above), so he uses paper terrorism and dilatory tactics to delay court proceedings.  As you can see, it is now May. Several hearings have taken place, requiring that Santiago pay his lawyer for appearing in court. Mr. Stalker however, has yet to personally appear in court and is paying nothing.

Finally, Mr. Stalker’s arraignment was scheduled for yesterday, for the second time. It didn’t occur. The court had given his attorney time to brief Mr. Stalker’s argument about a jurisdictional matter and extended that time yesterday.

Santiago is now in debt for legal fees and costs and the case is still pending. Mr. Stalker’s use of dilatory tactics with continuing hearings have cost Santiago approximately $5,000. He would appreciate your help, if you can.

I’ve put a Paypal button on the border of this blog for that purpose. If 100 people donate $10, that would be a thousand dollars to help defray the costs.