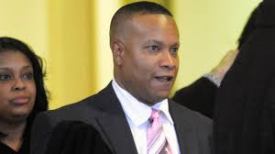 44-year old Craig Taylor is an 11-year veteran patrol officer. On July 26, 2013, a staff member reported that John was combative with emergency workers trying to care for him. Taylor was one of five officers dispatched. Mercury News reports;

“According to court documents, when the officers entered his room they saw Wrana holding a long metal object that officers believed was a knife or machete, but was actually a shoe horn. Wrana did pick up a knife and threaten the officers with it, and he refused their orders to drop it.”

Prosecutors say that Taylor fired bean bags at John 5 times, hitting him in the abdomen and the hand in which John was holding the knife.

Training standards state that bean bag shoots have an optimum distance of 15 to 60 feet. All of the shots fired by Taylor were no more than 8 feet away. Prosecutors say that Taylor fired 5 beanbags in rapid succession into John’s abdomen from 6 to 8 feet away. John died from internal bleeding.