Ian Furminger was a Sergeant who worked in a plainclothes unit of the San Francisco police department. Furminger was convicted of four of seven counts that included stealing money and drugs from drug dealers and other corrupt acts. On February 23, 2015, Federal judge Charles Breyer sentenced Furminger to the maximum sentence of 41 months in federal prison and a $25,000 fine.

“We all rely every day that the police will be honest, fair.”

Furminger was one of three officers prosecuted. His co-defendant, former officer Edmond Robles, was found guilty on five counts related to conspiracy to sell drugs, extortion and theft. Reynaldo Vargas pleaded guilty and testified for the prosecution against Furminger and Robles. The trio worked together. Among their crimes, they searched houses and hotel rooms without warrants. In one incident, the 3 officers took $30,000 from a heroin dealer’s house and split the case, allowing Robles to purchase an expensive Belgian road bike. Furminger purchased new skylights.

Furminger filed a motion for bail pending appeal, and that is where things get interesting. END_OF_DOCUMENT_TOKEN_TO_BE_REPLACED

A friend in LA told me this afternoon that there had been an earthquake. I have not had on the television to hear about it. Thanks for the report. 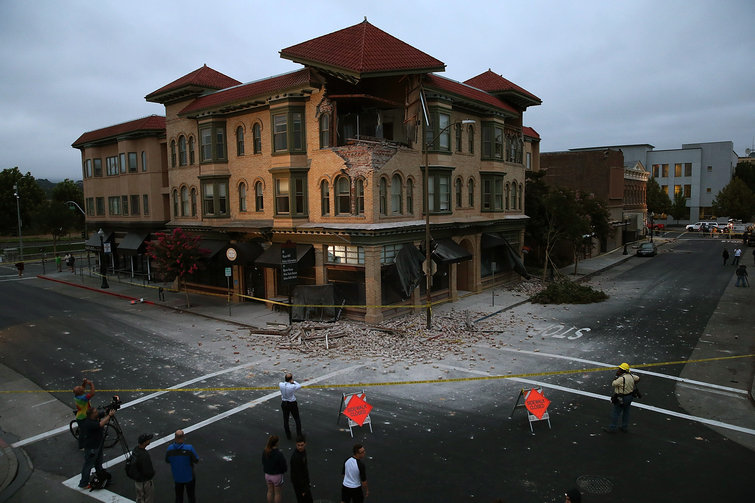 At 3:20 a.m. Pacific time on Sunday, an earthquake with a magnitude of 6.0 hit the San Francisco Bay Area.

The USGS reports that it occurred 6.7 miles below the surface, with an epicenter just south of Napa and about 30 miles northeast of San Francisco. This is the strongest earthquake felt by the region in 25 years, since the 1989 Loma Prieta quake, which had a magnitude of 6.9.

Shake map of this morning’s earthquake via the @USGS. pic.twitter.com/lafXiiIM3e

There have been no deaths reported so far, but 87 people are being treated for injuries at a Napa hospital, and three are in critical condition — including a child struck by fragments of a collapsing chimney.

There are also numerous damaged buildings and roads in and around Napa, including a damaged highway foundation near the city of Vallejo.