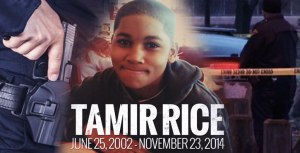 Matthew Cicero, a five-year veteran of the Cleveland Metropolitan School District, accused the mother of the slain 12-year-old of being motivated by money.

Matthew Cicero, who has worked as a Cleveland Metropolitan School District resource officer for five years, posted the comments several days after prosecutors declined to indict officer Timothy Loehmann, who shot and killed Rice within seconds of encountering the 12-year-old at a public park in November 2014. Officers did not administer first aid to the boy, and he died the next day.

Cicero’s posts have been deleted along with his entire Facebook page, but were ABC-affiliate WEWS captured images. Cicero began his rant by blaming Samaria Rice of being a bad parent under an emoji that said “feeling annoyed,” according to screenshots posted by the station.

“Tamir rices momma just want money,” he wrote. “Lets make the proper changes……raise your kids not to play with fake guns stupid b**ch. All this media because the are notgetting what they want…… Again pleeeeze anyone who does not like what I post…..unfriendly me or block me your not worth my time”

Another Facebook user pushed back, asking Cicero when a 12-year-old playing with a toy gun became “a solid platform for the death penalty?”

“This officer regardless of race was negligent and should be brought to justice for negligent homicide,” a Facebook user named Wendy Smith said. END_OF_DOCUMENT_TOKEN_TO_BE_REPLACED