The Life and Death of Georgia Sheriff Deputy Kyle Dinkheller

In my research for the series Defining Black Lives Matter, I found some articles about Blue Lives Matter.  I was going to include the following in a part of the series, but decided that this needs its own post.  It is about Georgia Sheriff Deputy Kyle Dinkheller.  First, please watch the video.  When I first watched it, I fell to my knees sobbing.  It’s one of those painful things that we need to watch to see what humans do to other humans, and should remind us of the precious gift of life.

Brannan was found the next day. He had been wounded in the stomach. He was taken alive.

Officer Dinkheller left behind an expectant wife and 22-month-old daughter when he died on January 12, 1998. Deputy Dinkheller’s son was born in September 1998.  END_OF_DOCUMENT_TOKEN_TO_BE_REPLACED

In response to “Silence and Shame after Charleston,” written by Padre Steve’s World that I reblogged, Two Sides To A Story commented.  It is a profound comment.  She gave me permission to post it separately.

Written by Two Sides To A Story

Heartbreaking subject. But despite public figures avoiding the topic in order to not offend supporters, there’s still lots of fertile discussion online in blogs like yours and in social media. And there’s plenty of cyber-fistfights and name-slinging too, so proceed with caution!

The people that disturb me as much as outright racists are a surprising number of people who think they’re not racist but deny that there’s a problem any more – they’re “sick of racism” and so they think never mentioning race fixes the situation despite the facts. Basically they seem invested in denying that white privilege exists in spite of how challenging white lives are, and that a great deal of racism is embedded in our institutions and justice system. We’re seeing the latter as a light has been shined on law enforcement to reveal corruption and racism within the ranks. END_OF_DOCUMENT_TOKEN_TO_BE_REPLACED

Archie Andrews One of 2014 Gun Statistics 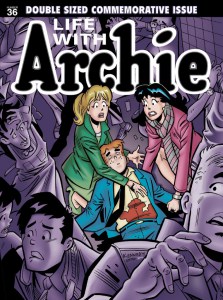 Archie Andrews, 73, died from a gun shot today because he protected his friend Sen. Kevin Keller from an assassination attempt. Anyone who has read comic books for the past seven decades knows Archie, from DC Comics Life with Archie. In this way, Archie Comics and co-CEO Jon Goldwater brings the issue of senseless gun deaths to entertainment media.

The first gay character in the Archie Comics series, Keller is a married military veteran and newly elected senator. He pushed for more gun control after his husband, Clay, was involved in a shooting while trying to prevent a robbery. Today’s #36 shows the killing; #37 will show Archie’s friends paying tribute to his legacy one year later.

Goldwater said that the comic’s plotline was not a publicity stunt but a way to educate readers about gun violence.

Superheroes such as Marvel’s Spiderman and Captain America have died, but Archie has…

I understand that there is legal action in the federal courts because the Illinois Governor challenged conceal carry law. Citizens are against it, but State legislatures passed it against the desires of their constituents.