Journey For Equal Justice In Valdosta, GA. The Death of Kendrick Johnson and Recent Judicial Complaints

(A note. Highlights in blue are embedded links to news sources.  Clicking on them opens the source in a new tab.) 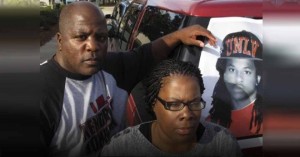 Kenneth and Jackie Johnson with a photo of Kendrick.

It’s been a long journey for the parents of Kendrick Johnson.  In January 2013, the 17-year old’s body was found in a gym mat in the high school he attended.  Local authorities ruled the death an accident.  Kendrick’s parents hired a pathologist who found that Kendrick died of blunt force trauma.

To add insult to injury, all of Kendrick’s internal organs were missing, replaced with newspaper.

In April 2013, Kendrick’s parents Jackie, Kenneth Johnson, and 5 family members protested outside of the courthouse.   The protest was designed to pressure the local sheriff’s office to release the investigative file of Kendrick’s death.  They were arrested.  In January 2015, they were convicted of civil disobedience. Their sentence was suspended for 12-months as long as they didn’t get arrested for civil disobedience in the next year.

Judge Mark Mitchell allowed cameras in the courtroom during the trial.  He explains his order in the first 3 minutes of the below video.