In June of this year, we reported what happened to Gabriel Carrillo at the Los Angeles County Jail where he went to visit his brother. The beating done to Gabriel resulted in the city settling a case for $1.2 million.

On Monday, former Sargent Eric Gonzalez was sentenced to 8 years in a federal prison for overseeing the backroom beating of Gabriel. U.S. District Judge George King ordered Gonzalez into custody immediately after sentencing, telling him he had “abused his authority and corrupted the very system he was sworn to uphold.”

Gonzalez was a 15-year veteran of the Sheriff’s Department. In June, he was found guilty of deprivation of civil rights, conspiracy to violate constitutional rights and falsification of records. Four other deputies have been convicted in the case and await sentencing, while a fifth was indicted last month and faces trial in December.

The convictions in Carrillo’s beating are part of a federal investigation of civil rights abuses and corruption at the nation’s largest sheriff’s department.

Yahoo news reports that nearly two dozen members of the department, including the former second-in-command, have been charged with crimes ranging from beatings to obstruction of justice; 15 of them have been convicted so far, according to the U.S. Attorney’s Office.

In arguing for a sentence of more than 11 years, federal prosecutors stated;

“An aggravated assault with serious bodily injuries is a grave offense. When such a crime is undertaken by a gang of law enforcement and then covered up as if the victim committed the crime, the harm to important societal interests makes the crime all the more significant.”

END_OF_DOCUMENT_TOKEN_TO_BE_REPLACED

In February 2011, Gabriel Carrillo came to the Los Angeles county jail to visit his brother. He had a cell phone, and mouthed off to the deputies when told that it was a misdemeanor offense to bring a cell phone into the visitation room.  Deputy Pantamitr Zunggeemoge arrested Gabriel, and took him into a break room where there is no video.  Zunggeemoge handcuffed Gabriel, and confiscated the cell phone. 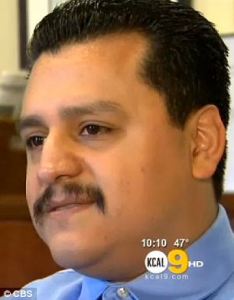 came out of the break room looking like this. 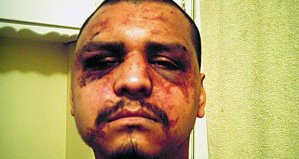 Five deputies beat, kneed, and pepper sprayed Gabriel.  Once they were content that they had taught Gabriel a lesson, the five deputies in the room gathered to concoct a story to justify the beating. Sergeant Gonzalez, the supervisor, told them to say that Carrillo had one hand free from handcuffs so he could be fingerprinted, when he began swinging wildly with the loose handcuff using it as a weapon, giving the deputies no choice but to beat him within an inch of his life.