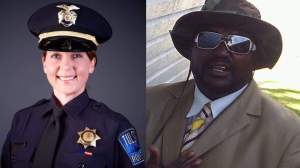 Shelby was hired by the Tulsa Police Department in 2011 after working for the Tulsa County Sheriff’s Office from June 2007 to November 2011.

In the 5 years that she’s been on the police force, Shelby had two excessive force complaints.  Authorities say that both were unfounded.

The following information is from Betty Shelby’s application for employment with the Tulsa Sheriff’s Department, which you can read at this link.

When she applied for a position as a deputy sheriff in 2007, Shelby had been married twice before she married Dave Shelby, her current husband, who also works for the Tulsa Police Department and was in the helicopter that captured video of Shelby killing Terence.

Based on her 2007 application for employment, Shelby had not worked since 2002.  Her last job before being hired as a deputy sheriff was as a teacher’s assistant.  She wrote on the application that she quit that job to attend school full-time.

On her application for employment, Shelby answered “yes” to the question, “Ever possessed or used illegal drugs?”

She also answered “yes” to having a protection order filed against her, or pending action.

Some sources are reporting purported letters that Shelby wrote explaining the orders of protection and her drug use, but those letters have not been publicly released.

NBC reports that the 42-year old officer’s work history and past conduct are now under scrutiny as authorities examine if she acted within reason in killing 40-year old Terence Crutcher.

On September 9, 2016, the United States Department of Justice announced that Reynoldsburg Police Officer Shane M. Mauger, 42, of Columbus, Ohio, was sentenced in U.S. District Court to 33 months in prison for using his position as a police officer to deprive people of their civil rights by falsifying search warrant affidavits and unlawfully seizing money and property during drug trafficking investigations.

An undercover officer, Tye Downard, was implicated in the case but committed suicide after he was arrested.  A third officer connected to the case was suspended earlier this year.

Mauger agreed to plead guilty to one count of federal program theft, and conspiracy to deprive persons of their civil rights.  Each count carries a sentence of up to 10 years in prison.  In addition to the 33 month prison sentence, Federal Judge Marbley also ordered Mauger to remain under court supervision for 2 years after he completes his prison sentence, and perform 4 hours of community service per week while under court supervision. END_OF_DOCUMENT_TOKEN_TO_BE_REPLACED

From 2011 to 2013, 45-year old Robert Vaughan robbed 8 drug dealers of cocaine, marijuana and contraband cigarettes.  He earned a profit of $300,000.  Vaughan conducted the robberies in Chicago, Cicero, Plainfield, Lyons, Melrose Park, and Forest Park, Illinois.  Maybe this would not be news if not but for the fact that Vaughan was a police officer with the Cook County Sheriff’s Department when he committed the robberies along with two other law enforcement officers.  Vaughan admitted to the crime in a plea agreement.  On April 13, 2016, Vaughan was sentenced to 7 and a half years in federal prison.

“This is the type of crime one would expect to only see on a television show. The crimes were brazen, arrogant and detrimental to the citizens of this district.  While the victims of the offense in this case garner no sympathy – they are drug dealers and contraband traffickers – it cannot excuse the outrageous conduct by Vaughan, who committed robberies using his badge and gun.”

END_OF_DOCUMENT_TOKEN_TO_BE_REPLACED

Putting A Dead Child On Trial

I’ve read some comments from GZ fans, and they are so on the wrong track assuming how Trayvon’s school records can be used to support that Trayvon was a “thug.” For those who want to know how O’Mara can or cannot use Trayvon’s school records, Frederick Leatherman’s Law Blog has dedicated a page to the subject. Zimmerman: What Kind of Character Evidence will be Admissible at Trial?

Among comments on the internet by some GZ fans, they are angry that GZ’s school records were accidentally released to the public.   They demanded that Trayvon’s school records be released as a tit-for-tat strategy.  You see, with GZ’s  fans, each time information is released to the public about GZ that is not favorable or is questionable, his fans develop a lie about Trayvon Martin.  Then, they pressure GZ’s attorney, Mark O’Mara, to find evidence for their lies.

For instance, by his own admission, GZ is ADHD and takes meds for it as well as for anxiety.  His fans countered with lies that Trayvon makes “lean” or “Purple Drink.”   After someone discussed on the internet that GZ may have attended AA meetings with Joe Oliver, GZ’s fans countered with a lie that Trayvon was a drug dealer.  After Witness 9’s statement was released to the public, GZ’s fans attacked Trayvon’s father, Tracy Martin, painting him as a man with numerous wives, ex-wives, and girlfriends.

Although I do not believe that Trayvon’s school records contain anything that will disparage his character,  that doesn’t mean that O’Mara cannot try.   In GZ’s second bond hearing, O’Mara attempted a backdoor effort to have GZ address the judge without the State cross-examining him.     Thus, there is good reason to suspect that O’Mara will attempt to interpret Trayvon’s suspension from school in his defense for why GZ killed him.

If O’Mara makes any attempt to go beyond physical and forensic evidence, and throws mud at Trayvon Martin, he will convey a powerful message to America’s parents and youth.  That message is that anyone can kill children on the street and claim self-defense, and in disregard of physical and forensic evidence, the child’s suspension from school qualifies him or her as a “thug” who deserves to be killed.

Any effort to assassinate Trayvon Martin’s character might infuriate the majority of Americans.  America’s citizens include parents and children.    Remember how America reacted when Timothy McVeigh referred to the 19 children killed in the bombing of the federal building in Oklahoma City as “collateral damage”?   Oh yes, I know.  GZ says he killed an unarmed 17 yr old 11th grader in self-defense.   If that is true, then physical and forensic evidence should support his story without attempting to conduct character assassination of a 17 yr old.  Using any other strategy demonstrates to parents and teens that private citizens can profile, chase, and kill children, and consider them as mere collateral damage in any private citizen’s war on crime.

A sample of comments about donating to GZ’s defense fund provides further support that they are more concerned about an agenda than they are concerned with George Zimmerman, the person.  Remember when GZ re-activated his website in effort to increase donations?  Comments posted on a Pro Zimmerman website on that subject by GZ fans include:

The reply to that comment confirms that what they mean by “vigorously defend” is not what O’Mara does in the case, but rather who he is not attacking or defending in the media.

I am sure you remember paragraph “g” of the July 5, 2012 order of the court that sets forth;

“The Defendant shall not open or maintain a bank account.”

The following comments (from the same Pro Zimmerman website) demonstrate how GZ’s fans seek to circumvent that order of the court.

With O’Mara providing money to GZ for his living expenses, why would GZ need unknown amounts of cash in his pocket?  GZ’s fans are not supporting him in their effort to circumvent the order of the court and the court’s reason for paragraph “g.”   Rather, they are calling the shots and if by chance GZ gets in trouble for it, then it’s the “system” that’s corrupt because in their minds, GZ should had never been charged.

Not only does GZ’s fans disrespect the deceased and his parents, they disrespect the court and appear to think of O’Mara as nothing more than their messenger boy.  IMO, he will make a grave mistake if he puts Trayvon on trial.  It will present Trayvon Martin’s death as collateral damage in GZ’s personal war on crime.   It will put all parents on notice that their children had better be perfect in school, and submit to adult men following them, or they can be shot dead in their neighbor’s backyard.

“…he’s on drugs or something.”