On July 31, 2017, we began following the trial of former St. Louis police officer Jason Stockley, for killing Anthony Lamar Smith.  You can read it at this link. The media provided bits and pieces of what happened at trial because the judge did not allow any cameras nor electronic devices in the courtroom.

This case was controversial for several reasons, but the main reason was because Stockley appeared to have planted a gun in Smith’s car.  Stockley’s DNA was found on the gun, but not Smith’s DNA.

Stockley opted for a bench trial.  Only the judge decides.  There is no jury.  Trial ended on August 9, 2017.  Judge Timothy J. Wilson stated that he would not have a decision entered until after August 18, 2017.   The month of August came and went, and there was no decision.  Then came reports that St. Louis was preparing to keep the peace because of potential protests and violence if the judge acquitted Stockley.   That was the first indication what the judge’s decision would be.

This morning, Judge Wilson entered a 30 page decision that you can read at this link.  He entered a ruling of not guilty of first degree murder and not guilty of armed criminal action, saying that the state failed to meet its burden of proof.   The judge’s decision sounds as if he would have decided guilty for involuntary manslaughter had the state sought those charges.

This is the decision of the court.  The United States does not allow prosecutors to appeal unfavorable decisions.  They get one chance only.

Oddly enough, had Anthony Lamar Smith been a defendant and the judge found him guilty and wrote the following in his decision, Anthony might have a good basis to appeal.  It’s a statement as to whether Anthony was or wasn’t armed. Judge Wilson wrote on page 26;

“Finally, the Court observes, based on its nearly thirty years on the bench, that an urban heroin dealer not in possession of a firearm would be an anomaly.”

END_OF_DOCUMENT_TOKEN_TO_BE_REPLACED

Juries, not judges, must decide whether ultimate penalty is justified.  I am opposed to the killing of humans, and that includes the government sanctioned death penalty.  Yesterday, Richard Wolf of USA Today reported that the Supreme Court of the United States ruled that judges deciding on the death penalty rather than juries, is unconstitutional.

WASHINGTON — The Supreme Court on Tuesday struck down Florida’s system of letting judges, not juries, decide whether convicted criminals deserve the death penalty.

The 8-1 ruling is significant because Florida has about 400 prisoners on death row, second only to California — and unlike California, it conducts executions regularly. However, most of the state’s prisoners are not likely to be affected because their appeals have run out or their convictions were based on indisputable aggravating circumstances.

In Florida, judges can impose the death penalty even if the jury has not ruled unanimously or agreed on any aggravating circumstance. If the jury has issued a recommendation, the judge doesn’t have to follow it. No other state gives judges such discretion.

“We hold this sentencing scheme unconstitutional,” Sotomayor said. “The 6th Amendment requires a jury, not a judge, to find each fact necessary to impose a sentence of death. A jury’s mere recommendation is not enough.”

Alito disagreed, contending that past Supreme Court rulings allow judges to establish the facts leading to a death sentence. Even so, he said, “under the Florida system, the jury plays a critically important role.”

The case was brought before SCOTUS by Timothy Hurst, a death row prisoner in Florida.   In 2002, the Supreme Court ruled that juries, not judges, must determine whether the necessary facts exist to justify a death sentence.  In Hurst’s case, the jury voted 7 – 5, and it was not clear what the majority voted.

There is a judge that gave an unbiased opinion on what the officers should and should not be charged with. I don’t think that the grand jury was presented with that opinion. Thanks for remembering Tamir.

This is not the blog I planned for today. However, I lived in Cleveland, OH for twenty five years. My late husband was an engineer at Channel 8 TV where I got this breaking news.

Cleveland is a city that is trying hard to improve itself and it has in many ways. However, Cleveland is in Cuyahoga County and the FBI has unearthed corruption more than once. Elected officials are at this moment in time doing time for graft, corruption and a variety of other crimes.

I was still living there when Tamir Rice was shot to death. It was winter and there was snow on the ground. Tamir was a twelve year old child who was playing with a toy gun. As children have for generations, he was playing cops and robbers or cowboys or some scenario in his imagination that will we never know about.

What angers me is that there are separation of powers, and prosecutors are replacing the judiciary as interpreters. Judges have defined “reasonable” and that is also included in jury instructions in cases of this nature. Now, how can a prosecutor who has found that killing 12-year old Tamir Rice was reasonable, is going to be able to indict a ham sandwich before the grand jury?

For those of you whom don’t remember, Tamir Rice was a 12 year old school kid, who was playing with a toy gun, when he was gunned down in approximately three seconds by , police officer Timothy Loehmann, who was responding to a 911 call about someone walking around with a gun. Ohio by the way is an open carry state.

A grand jury will still have to make the final decision if charges will be brought against Loehmann.

FOR ADDITIONAL INFORMATION USE LINK : 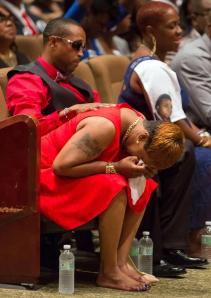 A grand jury began seeing and hearing evidence and when their session expired, the judge extended their time until January 2015.  Strangely, Darren Wilson was invited to testify before the grand jury and it was reported that he testified 4 hours. END_OF_DOCUMENT_TOKEN_TO_BE_REPLACED