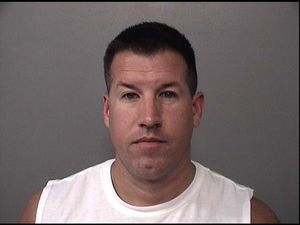 Generally, I would not think that this case would be of interest here because it’s unlike other cases I report that involve excessive use of force while on duty.  This one caught my attention because we have a president in office who said when men have money, they can do whatever they want to women — even grab them in their private areas.

Donald L. Cheney, Jr. did just that, and this case shows what women have to go through and prove to get a semblance of justice.

Illinois Department of Corrections Officer Donald L. Cheney, Jr. 42-years old, has been convicted of misdemeanor battery for doing what Donald Trump said he can do because he has money. Cheney Jr. was a correctional officer at a women’s prison in Illinois.

Cheney Jr. was originally charged with felony criminal sexual abuse.  He opted for a bench trial before Circuit Judge Thomas E. Griffith. Cheney’s defense filed a motion to dismiss the felony charge on the grounds that it was not proven that force was used.  Judge Griffith dismissed the felony charge, but found Cheney guilty for a misdemeanor battery charge.

The victim was a 27-year old bartender who on December 19, 2015, was working at the Department of Corrections annual Christmas party. She said she walked up to the table where the defendant was sitting when he grabbed her crotch area, over her jeans. END_OF_DOCUMENT_TOKEN_TO_BE_REPLACED