THEREFORE, by the powers vested in me as the Governor of the State of Illinois, pursuant to the Illinois Constitution and the Illinois Emergency Management Agency Act, 20 ILCS 3305, Sections 7(1), 7(2), 7(3), 7(8), 7(12), and Section 19 thereof, and consistent with the powers in public health laws, I hereby order the following effective immediately:

Section 1: Face covering requirements for individuals.  Beginning on Monday, August 30, 2021, all individuals in Illinois who are age two or over and able to medically tolerate a face covering (a mask or cloth face covering) shall be required to cover their nose and mouth with a face covering when in an indoor public place.  Illinoisans should also consider wearing a mask in crowded outdoor settings and for activities that involve close contact with others who are not fully vaccinated.

Face coverings may be removed temporarily while actively eating or drinking (including in bars or restaurants), and may be removed by workers at workplaces when they can consistently maintain six feet of distance (such as when workers are in their office or cubicle space).

You can read the full Executive Order at this link.

On Monday, November, 1, 2021, my son took me on errands.  It was around 5:10 p.m. when we finished up.  I told him that I was hungry but too tired to cook and wanted something other than a burger and fries.  We decided to go to Culver’s and the closest one is at 1224 Benington Road.   I like their cod dinners and they have broccoli as a side.  Because I’m allergic to soy bean oil, (in addition to other things), I’m very limited to what I can eat when ordering out.

The drive-thru was very long and it didn’t look as if the cars were moving, so we parked in the lot and went in.  The man greeting us from behind the counter had on a mask that was below his mouth.  (Let’s call him Head Person In Charge (HPIC)) If not but for the fact that it was rush-hour (so other places would also be crowded), and the allergies, and I was hungry and tired, I would have turned around and walked out.   I stood back from the counter as far as I could. END_OF_DOCUMENT_TOKEN_TO_BE_REPLACED

Just after I posted Trump’s Suspension of Travel From Europe Sealed America’s Fate For Major Covid 10 Spread, news came out that Jared Kushner, Donald Trump’s son-in-law,  developed a national testing strategy.  Donald however, was looking for a re-election advantage.  As reported in Vanity Fair,

Most troubling of all, perhaps, was a sentiment the expert said a member of Kushner’s team expressed: that because the virus had hit blue states hardest, a national plan was unnecessary and would not make sense politically. “The political folks believed that because it was going to be relegated to Democratic states, that they could blame those governors, and that would be an effective political strategy,” said the expert.

That logic may have swayed Kushner. “It was very clear that Jared was ultimately the decision maker as to what [plan] was going to come out,” the expert said.

I took another look at the Department of Homeland Security’s list of airports allowing the landing of planes from Europe carrying American citizens.  There are 13 airports on the list.   Other than Texas, Georgia and Florida, the planes were not allowed to land in other southern states.

Donald Trump exploited Covid-19 , intentionally allowing the virus to infect Blue States, not provide testing through the federal government, and blame Democratic Governors for the spread and lack of testing.

Now, the Lincoln Project has come out with a video about it.

THAT IS NOT TRUE FOR THE STATE OF ILLINOIS

I reside in the State of Illinois where I am a registered voter.  In the mail, I received an “Application For Vote By Mail”.  It is not a ballot. I would need to fill-out the application and wait to receive the ballot by mail.

Trump’s generalizations include an assumption that only Democrats want mail-in voting for the general election.  There is a pandemic in America.  Covid-19 acts differently in people, but it can be deadly.  People not only have to think about themselves, but also those around them; family, friends, co-workers. No sane person wants to gamble with their life.

That suspension meant that Americans in Europe needed to return home, and Trump gave them 48 hours to do so, packing them into airports like sardines for hours.

Trump has praised himself for his decision in January to restrict travel from China in order to contain the coronavirus, claiming that his decision saved millions of lives.  His response to travel from Europe however, opened the back door for Covid-19 to enter the U.S.  Many Americans did not want to be stuck in Europe and returned to the U.S. on the same weekend, bringing the virus with them.   Exposed travelers into the U.S. from Europe sealed the nation’s fate for a major spread.

On March 12, 2020, Trump suspended all travel to the United States from Europe for 30 days.  Americans had 48 hour notice to make travel arrangements back to the U.S.

We should never forget that it was Trump’s decision that caused a major spread of Covid-19 across the United States.

On March 13, 2020, the Department of Homeland Security published its outline for Americans returning from Europe.

““Effective for flights taking off at 11:59 PM EDT on Friday, March 13th, Americans returning from all restricted countries will now be required to travel through the following 13 airports:”

During Memorial Day weekend, while the U.S. death toll from the coronavirus was nearing 100,000, and after he had called for the reopening of the nation’s churches, Donald Trump was playing golf. In fact, he hit the course that he owns in Virginia, twice. Quite frankly, I’m surprised he felt confident enough about his safety […]

via An Incalculable Loss — claytoonz

This is really cool. Nurses along with other front line workers are true superheroes. They deserve a place of honor in our world these days.

The Governor of Illinois gives a briefing around 3 p.m. CST.  About 3 times a week, that briefing is followed by one held by County and City officials.   When they have finished, I’m usually off to the kitchen to start cooking dinner.

Thursday was different.  I had left-overs so after the local briefings, I turned to MSNBC.  I was hoping it was too early for the Donald Trump liar-a-thon, but I was wrong.  When he spoke about killing coronavirus by injecting people with disinfectant, I went numb for a few seconds.  UNBELIEVABLE!

Twitter has been ablaze with comments, memes, and jokes about Trump’s cure.  Among them all, I found the following extra funny because it gave no clue that it wasn’t serious and seriously funny.  Enjoy.

"Can we Inject people with disinfectant?" pic.twitter.com/LxdNFxwVOe

I’m pretty sure by now that everyone who has followed the decline of America under Donald Trump’s administration is familiar with how he disbanded the Pandemic team established by former U.S. President Barack Obama.

Here’s a video clip of what Trump did with that Department.

Now, like in other situations, Donald Trump blames the past administration for his failure to quickly act to provide necessary medical equipment to healthcare providers and tests.  I think of it like this …

In January 2017, Donald Trump leased a house for 4 years.  Three years into the lease, he has guests who visit and, who use the washrooms.  Discovering that there is no toilet paper, the guests tell Trump.  In response, he says, the previous owner didn’t leave any.  He then sends out someone to a convenience store to purchase one roll of toilet paper.

A few hours later, that one roll of toilet paper is used up, but Trump responds by saying that he acted very quickly to get toilet paper so no one should complain.

He creates and leaves a stinky situation.

No Donald Trump. The Cure Is Not Worse Than The Problem.

Regarding the coronavirus sweeping across the United States, on March 22, 2020, U.S. President Donald Trump said in a tweet;

“WE CANNOT LET THE CURE BE WORSE THAN THE PROBLEM ITSELF. AT THE END OF THE 15 DAY PERIOD, WE WILL MAKE A DECISION AS TO WHICH WAS WE WANT TO GO!”

During his briefing on March 23, 2020, Trump made it clear that his perception of a highly contagious virus with potential to kill is a “problem” rather than a public health issue. Rather than avoid the spread of the virus, he wants people to return to work.  He wants the stock market to go up.

According to Politico, the prospect of resuming typical business has horrified public health leaders.

“At a White House briefing Monday night, Trump seemed adamant that the economy would come back to life “very soon,” insisting that the government can fight the viral spread while also going to work — ‘we can do them both at the same time’.”

Let’s be clear about something.  The White House recommended “social distancing” but Trump, neither anyone in his administration, gave stay-at-home orders. He can’t rescind nor change orders that he didn’t issue.

Trump on the coronavirus

Yesterday when asked about mask shortages for medical personnel, Trump responded about “past administrations”. SMH 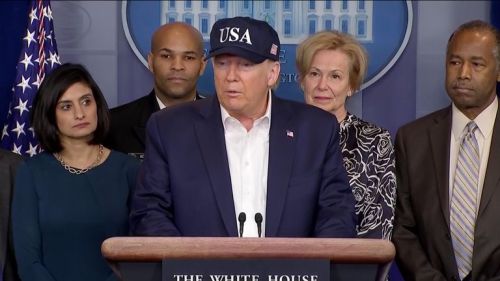 Here is some of what President Trump in the US has been saying about the coronavirus disease (covid-19) for the past two months:

The virus is thought to spread mainly from person-to-person.

These droplets can land in the mouths or noses of people who are nearby or possibly be inhaled into the lungs.

Can someone spread the virus without being sick?

It may be possible that a person can get COVID-19 by touching a surface or object that has the virus on it and then touching their own mouth, nose, or possibly their eyes, but this is not thought to be the main way the virus spreads.

What are they not telling us?

Tags: CDC, coronavirus, covid-19, how it is transmitted 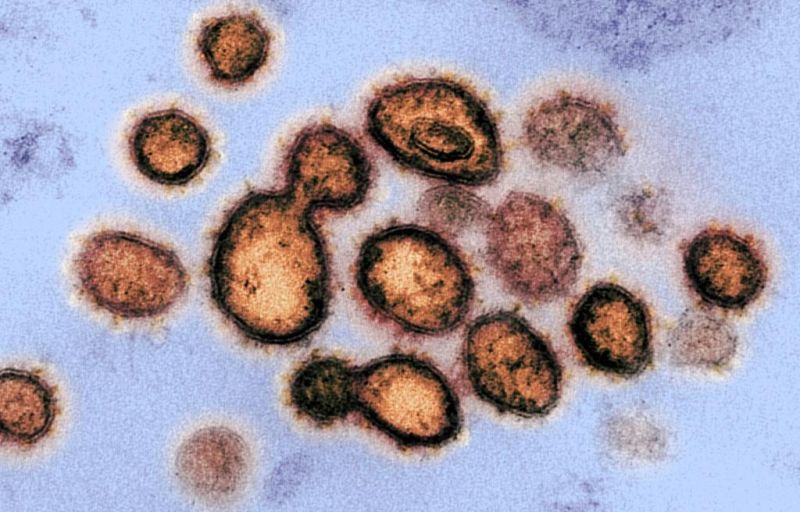 Friends of Padre Steve’s World, I have been working on this article for two days in order to check sources and facts and to try to find the best sources of information for my readers. The novel Coronavirus, or COVID 19 is now spreading at a rapid rate around the world, after beginning in and […]

via Coronavirus 19: Just the Facts — The Inglorius Padre Steve’s World