Caterpillars, moths, butterflies, and all creatures great and small;

There is lots of news.

This afternoon, officials began identifying the 14 victims of the San Bernardino mass shooting. The Huffington Post has posted the information. One victim leaves behind 6 children.

The New York Times is keeping a running format on investigation updates.

Also this afternoon, Twitter suspended George Zimmerman’s account. It appears that he was in a relationship with a woman in Kentucky, and they broke up. Zimmerman went on a revenge-porn campaign, posting nude photos of her on Twitter along with her address and phone number. The Daily Dot has screenshots and the story.

END_OF_DOCUMENT_TOKEN_TO_BE_REPLACED 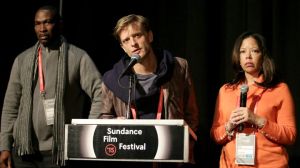 3 1/2 Minutes is a documentary movie about the Jordan Davis’ murder. For a background on the film, click here to see our previous article. The documentary was presented at the Sundance Film Festival and has won the Documentary Special Jury Award for Social Impact. Jordan’s parents, Lucia McBath and Ronald Davis, spoke at the acceptance.

“I am grieved that these continuing stories are everyday matters swept away,” HBO Documentary Films president Sheila Nevins said in a statement. “By bringing this powerful film to HBO audiences, we hope to elevate the national conversation around these tragic issues.”

Here’s the award announcement and acceptance.

Here’s the trailer for the movie.

From the documentary film, 3 1/2 Minutes.

At Sundance, the premier independent film festival, the documentary titled 3 ½ Minutes will take the screen in Utah. Minette Nelson wanted to document a story that would continue the discussion on race and gun violence with a focus on Florida, but she wanted a story that was not as well-known as the Trayvon Martin story. Her son told her about Jordan Davis. She read everything she could about the killing and mailed Ron Davis, Jordan’s father, in April 2013.

“My letter stated that I felt that Jordan’s case could be exemplary of what is wrong with post-racial society in America and that Jordan was no different from my son. Thirdly, that if there had been no gun in the equation, Jordan would’ve gone home safely to his bed that night.”

The 2013 festival’s award for best cinematography went to Marc Silver for the film, “Who Is Dayani Cristal?” Marc Singer directed “3 ½ Minutes.”  He has a promotion for the film on his website.