“He was no longer a sergeant for the Neptune Township Police Department. He turned into a criminal and a murderer,” said Marc Lemeiux of the Monmouth County Prosecutor’s Office.” 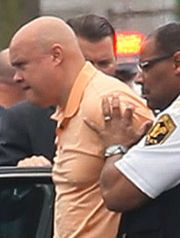 Sergent Phillip Seidle, a 22 year veteran of New Jersey’s Neptune Township Police department, is currently in custody on charges of 1st Degree Murder, 2nd Degree unlawful possession of a weapon for unlawful purpose and 2nd degree endangering the welfare of a child.

Charges came after Seidle ,51, chased his ex wife down as she drove with their 7 year old daughter.

It is reported that his recently divorced wife, Tamra Seidle, crashed into another vehicle in Ashbury Park New Jersey. A that point, Phillip Seidle drew his service pistol, a 40 caliber glock, and fired several shots into the side of his ex wifes vehicle. From there Seidle then positioned himself in front of the vehicle and fired several more shots in the windshield while their 7-year old was inside of the car.

Tamra Seidle was rushed to the hospital where she was pronounced dead. Officer Phillip Seidle eventually surrendered to law enforcement after attempting to take his own life. The couple has 9 children ranging from ages 7 to 24.

Our thoughts and prayers are with the family and children during this time.