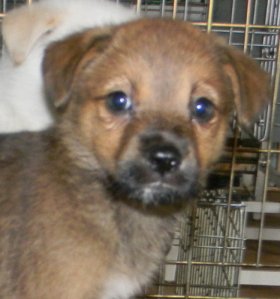 On July 27, 2010, a new life came into the world.  It was small, warm, furry, helpless.  Seven weeks later, it was at an adoption shelter.  All that the staff knew was that the furry little girl’s mom was a Siberian Huskie.  (We would later discover that her dad was a Boxer.)  She had a brother and sister and her sister was also up for adoption, but when I played with her, she wasn’t interested.   When I played with the puppy the shelter had named “Kim”,  I asked her to give me a sign if she wanted to come home with me.  She jumped on me and kissed me one time on the face.  That was my sign.   I took her home.  On November 18, 2021, as she heard comforting and apologetic words, she again gave a kiss and went to her home on the Rainbow Bridge. 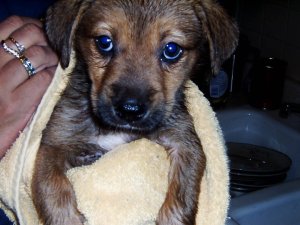 Miss Z at 7 weeks old. Her first bath. I could hold her in one hand.

Zenamarie (also known as “Miss Z), was a playful, joyful dog.   Her mix combo, called Boxsky was more than a handful.  She was inquisitive, and as you can see in the above photo, she looked as if she had all wisdom.

Some mornings, I opened my eyes to see this stare-down.

As the years went by, her black and brown muzzle turned white.  It’s strange seeing your furry face age.  She hadn’t slowed down her playfulness until she was 5-years old, only reducing it to about 10 minute increments.  The life span for her breed mix is 10 years.  I was blessed with having her in my life for an additional year.

Last year she developed fatty masses.  They seem to all appear overnight.  A trip to the Vet, and they were tested, coming back fatty masses — nothing to worry about.  I did begin giving her a teaspoon of olive oil daily and they began to shrink.

From the time I adopted her, Miss Z had a fantastic Vet.  He was also doctor to her predecessor,

Sheba.  Because of Covid-19,  his office was only taking emergencies.   In case you don’t know, Huskies and some mixed with that breed have very fast growing nails.  I’ve never been one able to trim any of my dogs’ nails and always took them to a groomer or the vet.   I took her to another vet whose office was open for non-emergency visits.

Three weeks ago, Miss Z stopped eating her food.  She would eat our food that we shared with her, and her treats.  She has a Kong and she played with it, eating whatever I stuffed into it.   I also noticed that she was losing weight.  She threw up phlegm.  Her gait was unsteady.  I was vigilant, even sleeping downstairs so she wouldn’t make effort to get up the stairs.

Tuesday morning, she ate a hamburger.  Then, she refused her treats, refused her food, and refused our food.  She would lay down and in 10 minutes, adjust her position with a groan.  Fortunately, her original Vet was back open for full-service and in she went to see him on Wednesday morning.  That Vet is also experienced in pathology and has microscopes and a digital x-ray machine.  He also got the report from the previous Vet who performed the surgeries.

It was bad news.  Her liver and spleen were swollen.  There was a spot above her colon, and a spot on one lung.  Her white blood cell count was high, and her red blood cells were not mature.  The Vet’s opinion was that her bone marrow was not making enough blood cells and that could be indication that the cancer was in her bones.  He gave her an anti-biotic,  a supplement for her liver, and prescription dog food.  He said that If she ate, she had about 4 months to live.  If she didn’t eat, the time would be shorter.  Mostly, it was her behavior that communicated to me she was suffering.   Wednesday night, she declined more.  Thursday morning, Miss Z could barely move her back legs, which trembled as she tried.  She was declining fast.

The decision was more than difficult.  Because of my own selfish love for her, I didn’t want to let her go unless it was time.  But, it was time.  She was suffering.  I could not stand to watch her suffer longer.

I am torn, grieving, and miss her so badly.  In about 2 weeks, her ashes will come home.