← Michael Cohen postpones congressional testimony, claims ‘threats’ from President Trump and Rudy Giuliani
Ralph Northam In Blackface, But What About The Medical School That Allowed that Ideology? →

Getting Through Another Chemo Treatment

Yesterday, my new oncologist prescribed dexamethosone.  It’s a long, nightmarish story for why that is necessary.  In summary, it is due to another oncologist administering a chemo drug to me that was unnecessary just because he had the authority to do so.  It started in October with this being a reaction to the same drug; 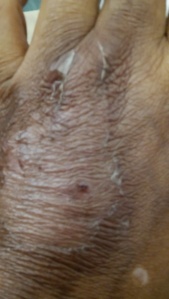 That’s necrosis, folks.  After it healed in late November, the oncologist appeared to not like that another oncologist jumped in leading to that healing, so on December 6, 2018, he had to try to undo it.  This time around, things did not end up with outright necrosis, but some of the skin texture did change, with purple swelling and burning pain.  The administration of that same drug did result in me being admitted to the hospital for 4 days because of life-threatening issues it caused.  That oncologist resigned his practice on January 17th.

By the way, the leak of that chemo drug also caused a DVT, (blood clots) in my upper left arm.  The results of an ultra sound last week shows that the blood clots have dissolved.  (Hallelujah) Because it was caused by an event, I go off blood thinners next week rather than having to take them for the rest of my life.

The most serious side-effect I’m looking at by taking dexamethasone is the possibility of becoming diabetic.

Anyway, one of the nurses in the cancer center told me to take the medication early in the day because it has the tendency to cause lots of energy.  We laughed with me asking, “You mean I’ll clean my house at the speed of light, shovel the expecting 3 inches of snow and write a book in several hours?”

Well, today I experienced some of that “anxiety” and turned on my stereo — thought I’d share some of the music with you.

We start off with the King of Pop, Michael Jackson, followed by the Godfather of Soul, James Brown.  No day of being on dexamethasone can go without jazz by the Braxton Brothers.  No day can start or activity end with what my mother used to say, “Don’t forget to thank God in all things” so here’s an inspirational song by Kirk Franklin.

← Michael Cohen postpones congressional testimony, claims ‘threats’ from President Trump and Rudy Giuliani
Ralph Northam In Blackface, But What About The Medical School That Allowed that Ideology? →