17-year old Laquan McDonald was killed by Chicago police officer Jason Van Dyke on October 20, 2014.  Van Dyke was not arrested until a judge set a date for the release of dash cam video.  That was in November 2015.

Van Dyke’s murder trial began the first week of September 2018 with jury selection.  Twelve jurors and 5 alternatives have been selected.  The jury consists of one Black woman, and two Blacks as alternatives.

On Thursday, September 20, 2018, the prosecution rested its case.  Van Dyke’s defense will now be presented to the jury.

Following the trial has been difficult for me due to personal matters, but I do plan on blogging the verdict.   Meanwhile, I have copied the post originally published in November 2015 because it contains background on what happened, including that without the intervention of Brandon Smith, an independent journalist,  Van Dyke might not have been charged.

It’s not what Laquan did or did not do. Rather, it is what the Chicago Police Department did after officer Jason Van Dyke killed Laquan.

Brandon Smith’s introduction on The Guardian, says that he  is a Chicago-based independent journalist who, with the help of whistleblowers and the Freedom of Information Act, has reported on civil rights abuses, privatization of public assets, digital privacy concerns and pollution of land and water.” 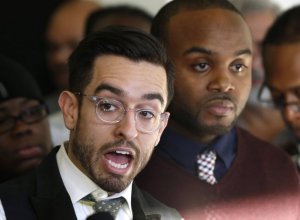 “Independent journalist.” I like that title because it reflects a form of journalism that has almost gone the way of the dinosaur. It would be correct to replace “independent” with “investigative” in this matter, because what Brandon Smith did goes beyond reporting. Without the backing of a publication to finance his endeavors, Brandon Smith did not have to proceed at his own costs. Brandon worked along with another independent journalist, Jamie Kalven, and University of Chicago law professor Craig Futterman. Because they are independent journalists, they aren’t often issued press credentials to attend press conferences and such.  In fact, he was not allowed to attend the press conference that discussed the release of video that came about due to his persistence and good work.

Had they not been independent and determined, we would not have the video of the killing of Laquan McDonald. Without the release of the video, Chicago police officer Jason Van Dyke would still be on paid desk duty; and his fictionalized report of what happened would be business as usual in cover-ups.

Kalven filed the Freedom of Information request for the video. The City declined his request. Brandon’s battle for release of the video began in May, 2015. In an article published in The Chicago Reader on August 7, 2015, Brandon wrote:

“But I’m not taking no for an answer—particularly in light of Kalven v. Chicago, an Illinois Appellate Court decision last March that established information about police misconduct is public, except in limited circumstances that don’t apply in the case of the McDonald shooting video.”

For those not familiar, when a Freedom of Information Act has been declined, the party making the request can file a lawsuit with the court asking that the court order the release of the requested information. That is what Brandon did, and that is what the judge ordered. The judge set the date of November 25, 2015 as the deadline to release the video.

In court, the City of Chicago fought against the release of the video saying that it would jeopardize their investigation. Laquan was killed by Van Dyke on October 20, 2014.   He was 17-years old.  Funny – as soon as the court ordered the release of the video, their investigation must have ended because the Chicago police officer who fired 16 bullets into Laquan McDonald was arrested and charged with first-degree murder. If the Chicago Police Department’s investigation relied on that video, the investigation should have concluded, and Van Dyke arrested, before the New Year bells ranged in 2015.

Brandon wrote in his article for the Guardian that activist William Calloway was his inspiration for seeking the video. Fourteen news organizations had refused to request the video, and about the same did request the video, only to be refused. Brandon actually started his request back in April. It was also in April that the City Council Finance Committee recommended giving Laquan’s family a $5 million settlement, although no suit had been filed. In June 2015, the settlement offer was approved.

In the autopsy report, performed on October 21, 2014 and signed January 15, 2015, Laquan’s toxicology report was negative for benzoylecgonine, ethanol and opiates. It made no mention of the presence of PCP. In April 2015, (the month that the City of Chicago started negotiating the settlement to Laquan’s family), the Chicago Tribune reported that they obtained Laquan’s autopsy from “the March 31 toxicology report through a Freedom of Information Act request.

The PCP is what some people, who justify the killing, are using to say that Laquan justified being killed.  The 3 page “AMENDED” toxicology report was signed by Michael Wagner on March 31, 2015.  The toxicologist was not given a gender nor date of birth for the person whose body fluids he was testing.

The police report says that Laquan lunged at the officers while holding a three-inch knife. According to them, the officer, fearing for his life, fired one shot into Laquan’s chest.

The video shows that Laquan was by-passing the officers, as if getting out of the way of an oncoming vehicle. There was no lunging.  The way that he was walking was if Laquan had no idea that he was the “suspect” that the police were there to apprehend.

The district manager for a local Burger King told NBC news that their security cameras captured what happened before the shooting. A 911 caller reported that a man was in the parking lot of a trucking company slashing tires and threatened him with a knife. Laquan had walked through the Burger King parking lot. After the shooting, according to Jay Darshane, the District Manager for Burger King, 4 to 5 police officers entered the restaurant and asked to see the video. They were given the password to the equipment and left three hours later.  Burger King wanted to be a help and cooperated without a search warrant.  The next day, an investigator from the Independent Police Review Authority asked to see the video tape and discovered that 86 minutes of it was missing. Darshane told NBC, “We had no idea they were going to sit there and delete files.

JASON VAN DYKE IS NO STRANGER TO INTERNAL AFFAIRS

A University of Chicago database revealed that in his 14-year career as a police officer, at least 18 citizen complaints were filed against Van Dyke.  Eight alleged excessive force.  Two involved the use of a firearm.  (The killing of Laquan now makes that three.)  Van Dyke was never disciplined.  Alison Flowers of the University stated;

“We don’t have all of Van Dyke’s complaints but the complaints of, the misconduct complaints from Van Dyke that we do have in our data tool show by and large excessive force and racial slurs. And he has largely operated with impunity and under a code of silence with the same huddle of officers again and again.”

Attorney Daniel Q. Herbert is representing Chicago Police Officer Jason Van Dyke.   He doesn’t want people to prejudge, nor try the case in the media. It’s too bad that Van Dyke did not give Laquan that same opportunity.

The following video is from May 2015.   It describes the reason given by the City for not releasing the video, and that Laquan’s family saw the video as part of the settlement, but agreed not to release it. It also presents the attorney for Laquan’s family addressing the missing portion of the Burger King video.