← Botham Jean
Is Soy In Our Food Making Us Sick? →

Ralph Elrod Who Threatened To Kill Black Neighbors, Killed Two Sheriff Deputies And Has Been Sentenced To Life

This case brought back memories of Kyle Dinkheller, whose murder also happened in the State of Georgia.  It also reminds me of discussions of how law enforcement treats suspects differently and gives reasonable inference that it is due to the color of their skin.  How often have we seen videos where law enforcement commands suspects to put their hands on the hood of the car, or lock their hands behind their heads, handcuff and search them before telling them they are under arrest?  Has America’s gun culture, stereotypes and bigotry, established that guns are only dangerous if and when on a Black suspect, as opposed to a White suspect?

Two Peach County, Georgia sheriff’s deputies might be alive today had they not given Ralph Stanley Elrod Jr. the benefit of the doubt that he would be arrested peacefully.  This is not to blame the sheriff deputies.  I can’t honestly say if Peach County Sheriffs treat all suspects in the same manner or not.  What I can say is that if law enforcement in other jurisdictions behaved in the same manner, then innocent lives would not have been taken.  Tamir Rice, Philando Castille, and Justine Damond, among others, come to mind.

There are too many cases of law enforcement officers being killed by Whites where major media barely makes a whisper and Blue Lives Matter reports a story that omits details about White cop-killers.

I did manage to dig up an article on Blue Lives Matter that mentions the cop-killer in this case. It is dated November 7, 2016.  It incorrectly reports that the deputies were “… immediately upon their arrival they were both shot without warning by Elrod.”   As the video in this post shows, the deputies were not “immediately” shot upon their arrival.  A deputy had a conversation with Elrod and was shot after telling Elrod that he was under arrest.  The  article also omits what the cop killer did that justified a 911 call.

In another article, Blue Lives Matter says in the headlines that one of the deputies was “ambushed.”   While the shooting was unexpected, the cop-killer was standing right in the deputy’s face, arguing with him.   Blue Lives Matter could not report what actually happened because in this case, a White man argued with a deputy sheriff, which goes against the stereotype that only Blacks argue with law enforcement. 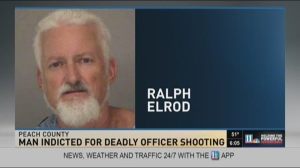 Elrod and his second wife moved to their house in 2012.  About 11 months before the incident, a Black family became his neighbor.  His neighbor has nephews who rode a four-wheeler and a dirt bike allegedly, near or in Elrod’s yard.

On November 6, 2016, one of the neighbors, Kelvin Ross, was riding a four-wheeler.  Elrod came out into his driveway armed with a shotgun.  Ross began recording.  Macon Telegraph reports the following recorded exchange;

“You can’t run this (expletive, expletive) up and down … (in front of) my house,” Elrod said. “I’m gonna kill your (expletive) ass!”

“You understand me?” Elrod said.

“I’m getting tired of your (expletive, expletive),” Elrod said.

Then he told motorbikers to “go on.”

The neighbors called the cops.  Deputy Patrick Sondron went to the neighbors’ house and spoke to the teens about their exchange with Elrod.  He also watched the cellphone video.  Deputy Daryl Smallwood was in a separate patrol car and he and Deputy Sondron drove over to Elrod’s house.  Elrod walked out to talk to them with a Glock 43 pistol hidden in the back of his waistband.

“Man, I’ve had multiple complaints with these people over here … running these damn quads (four-wheelers) and dirt bikes up and down the road. … They’ll get out there and pop wheelies back and forth. … Ain’t nobody doing nothing about it.”

Deputy Sondron asked Elrod why he took his gun out with him, and Elrod denied having a gun when he confronted the Black teens.  Elrod claimed that he told the teens to quit running up and down the “damn road” and that was it. 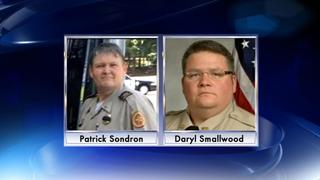 Deputy Sondron then told Elrod that there is a video that recorded everything he said and a picture of him with a gun in his hand.  Elrod claimed it was his squirrel gun and that he had been hunting squirrels.  Deputy Sondron informed Elrod that he, (Elrod), told the neighbor he was going to kill him, and it was all on video.  He asked Elrod where his gun was and Elrod responded by asking what difference does it make.

That is when Deputy Sondron told Elrod he was under arrest.  Elrod replied “No”, reached for the gun hidden beneath his shirt, and shot Deputy Sondron at point blank range. Elrod then turned his attention to Deputy Smallwood and shot him in the head.

Elrod did not try to render aid.  Instead, he went into his house, changed clothes and came back into his driveway in tactical gear carrying an AR 15 and a 12-gauge shotgun loaded with buckshot.

Neighbors had called the cops when hearing the gunshots.  Elrod took cover behind a patrol car, shooting it out with the police.  Byron, Georgia police officer Wesley Griffis wounded Elrod in the stomach.  Elrod continued to shoot, reload, and shoot.  It was only after he doubled in pain that he surrendered. 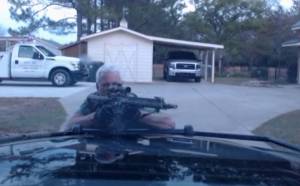 Less than 24 hours after Ralph Elrod was taken to the hospital, he gave a statement.  The videos and statement were not publicly released until this week after Elrod entered a plea agreement.  Had Elrod gone to trial and been convicted, he was facing the death penalty.  By pleading guilty, he has been sentenced to two life sentences without parole.

“The decision to accept a plea wasn’t one made rashly or without a lot of thought. In fact, I’d previously refused a plea offered by the defense. I said I’d only allow it if I was approached by the deputies’ families and if they wanted it. And that’s what ended up happening.”