← Anti-violence protesters block major freeway in Chicago
Jeopardy – The Correct Question Is, Who Is Michael Flynn? →

There are times I feel out of touch; out of touch with new music artists, actors and movies.   There were once neighborhood movie theaters where you could take a walk and see what movies were playing and coming soon.  Now, they are located behind big parking lots.   Some previews are shown during commercial breaks on television, but they cannot be compared to the movie posters of old.

Why am I reminiscing?  Saturday evening, family got together to watch a movie.  It is not the movie that caused me to reminisce but the one song on the soundtrack.

I’m a Marvel Comic movie fan and not much into DC Comic movies.  Superman was once my favorite superhero and remains on the list.  I think I watched the 1978 movie ten times or more; twice at the theater.   I never cared much for Batman.  The movies are dark and dank and without his special gadgets, Bruce Wayne is no superhero. 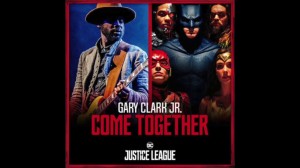 On Saturday when it was suggested that we watch Justice League, I wasn’t very enthused.  First, I didn’t see Batman vs. Superman and Justice League picks up where it left off.  I also had to be told about some of the characters.  (Throughout the movie, I kept referring to Aquaman as Poseidon.)  The movie was free and fun, but that song!   I went on ITunes.  I WANTED THAT SONG.

The title of the song and the movie is timely.  It’s time for people to come together for the betterment of mankind and Earth.

Why didn’t I know of Gary Clark, Jr.?   He took the Beatles song “Come Together” and didn’t simply do it as a cover — Gary brought the song into superhero existence.

I’ve read up on his work today and watched his music videos.   Gary Clark, Jr. reminds me of Jimi Hendrix; playing a mixture of rock, blues, and R&B.

Without further delay, ladies and gentlemen, here is Gary Clark, Jr. with Come Together from the movie Justice League.

← Anti-violence protesters block major freeway in Chicago
Jeopardy – The Correct Question Is, Who Is Michael Flynn? →
%d bloggers like this: