← Guns Have Changed, But Not Gun Laws
Knowledge of Automatic Guns When The 2nd Amendment Was Ratified Is A False Hypothesis →

Officer On Trial For Shooting Manuel Burnley, Jr. In The Back

A Brown Deer police officer, 28-year old Devon Kraemer, is on trial, charge with aggravated battery and intending great bodily harm for shooting 28-year old Manuel Burnley Jr. in the back.  If convicted, the officer faces up to 10 years in prison.  Brown Deer is a suburb of Milwaukee, Wisconsin.

Manuel Burnley, Jr. suffered rib fractures and lost part of a lung, but after 12 days in the hospital, he survived the shooting and lives to tell his side of the story at trial.

During jury selection, several potential jurors admitted they likely couldn’t be impartial when the defendant is a police office.  About 6 potential jurors said they keep “We Back the Badge” signs in their yard, and 1 person said he has a “Black Lives Matter” sign.  Two men said that even if the prosecutor presented solid evidence of guilt, they would not vote to convict.

One potential juror works in a dry cleaners patronized by police officers.  One woman said that she and her husband, both White, were profiled when they were stopped on the north side because of the kind of car they were driving. She said the officer looked shocked when her husband rolled down the window and saw they are not Black.  The officer warned him that the car’s tint was too dark.

The jury consists of 14; the standard 12 plus 2 alternates.   I was unable to find any information on the jurors who were selected.   A condition imposed on the media might prevent them from making that information available to the public because Manuel is Black, and the two officers involved are White.

Circuit Judge Christopher Dee has imposed extra restrictions on news media covering the trial, including a prohibition on showing the faces of all witnesses. He has also prohibited live streaming of the trial without his express permission.  Television station reporting staff is working the pool feed from a single bench.

The incident happened on March 14, 2016.  Kraemer and her partner were flagged down by a bus driver who told the officers that a passenger was arguing with her.  Officer Kremer boarded the bus and told Manuel L. Burnley, Jr. to exit.  He refused.  Kraemer and her partner, Michael Leeman, removed Manuel from the bus.  A witness testified that Leeman tripped Manuel and all three fell to the ground.  The officers rolled Manuel on his stomach.

Kraemer alleged that she was unable to gain control of Burnley’s left arm.  She also stated that she could not see it.  She admitted to drawing her firearm and pressing it against Manuel’s back.   Kraemer then pulled the gun back a short distance for what she said was to avoid malfunction, and fired one shot, striking Manuel in the back.  She then returned her firearm to its holster. 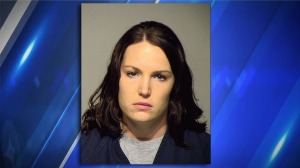 After he was shot, Manuel asked what happened and heard Kraemer’s partner, Leeman respond by saying, “We just shot you.” According to a document filed by Manuel’s attorney as a precursor to a lawsuit, Leeman is alleged to have used a racial slur.

Manuel, who is 5’ 7”, is a large man in weight —about 370 pounds.  On Friday, February 16, 2018 when he took the witness stand to testify, a number of questions revolved around his weight. Sargent Michael Carver testified;

“When I first got in the ambulance, I mean, she was visibly shaken, she was crying and I think the first thing she may have said, she made reference to how big the subject was.”

Manuel  testified that he too was afraid. “At the time, I thought I was gonna get killed. I heard, ‘We’re gonna have to tase him,’ and then I heard ‘Pow!'” Manuel Burnley told the court.

Monday on cross-examination, Kraemer’s attorney went after Manuel’s credibility.  Manuel testified that he was not resisting when he was shot.

“Kraemer’s attorney, Michael Steinle, focused Burnley’s attention on a statement he gave police two days after the incident, in which he said he “deserved to be Tased.”

“How were you deserving to be Tased if you weren’t resisting?” Steinle asked.

Burnley said because he was on the ground officers were having trouble handcuffing him. He had testified that he was trying to get the arrest over with, but that the officers were struggling because he is so big and his arms are short.

Steinle suggested that Burnley was upset that day because a girlfriend had broken up with him, and cited texts obtained from his phone. Burnley said the woman thought it was more of a relationship than he did, and that he wasn’t upset by the texts at all.

Manuel did admit he was out of line when he engaged in a loud, profane argument with a bus driver about not getting a transfer ticket. He said he had no idea that a few weeks earlier, the bus system had done away with paper transfers and gone to using “M Cards.”

Steinle asked him why police found a M Card among the items in his wallet. Burnley said he didn’t know why it was among his other things but repeated that it wasn’t his.

Steinle then tried to suggest that Burnley knew he was going to be arrested and cited for disorderly conduct on the bus, and that he would be going to jail on outstanding warrants.”

Burnley said he had no knowledge he had outstanding warrants, and that if he did, they must be for unpaid traffic tickets because he’s never been arrested or faced a criminal charge.  When Burnley left the courtroom, he was not arrested.  He went to municipal court and paid outstanding traffic tickets from 2008 and 2011.

The bus driver, Kimberly Richards, also testified in court and told the jury that she was terminated from the Milwaukee County Transit System because of the incident.   When she heard gunfire, she drove away and testified that she did so because “there was blood everywhere.”  However, a witness on Tuesday testified that after Kraemer shot Manuel and heard passengers reacting to it, she holstered her gun and instructed the bus driver to “get out of here”.

Leeman, Kraemer’s partner, testified last week that Burnley never threatened or attacked the officers but that he decided to take him to the ground when he began to pull away from him and Kraemer after they escorted him from the bus.   That testimony is inconsistent with Kraemer saying Manuel had his hand around Leeman’s throat, and she heard Leeman say that Manuel was going for his gun.

An expert has testified that Manuel was resisting, but not attacking, which made firing the weapon unjustifiable force.  That expert also stated that Kraemer did not have justifiable fear because she holstered her firearm after shooting Manuel in the back but before he was handcuffed.

Manual Burnley Jr.’s lawsuit is going forth in federal court.

Devon Kraemer, 30, was charged with aggravated battery for shooting Burnley. A jury in 2018 couldn’t reach a verdict in her case, and prosecutors opted not to retry her. In August 2018, she retired on duty disability after she said the stress of the shooting and its aftermath left her unable to perform her duties. She collects more than $57,000 a year from the state retirement system.

Burnley, 28, had two surgeries and was hospitalized 12 days. He suffers permanent damage to his back, lungs and chest. He sued Kraemer and the village in 2019.

← Guns Have Changed, But Not Gun Laws
Knowledge of Automatic Guns When The 2nd Amendment Was Ratified Is A False Hypothesis →
%d bloggers like this: