It’s a case of severe beating, then changing reports.

It happened on August 20, 2014 after a 20 mile, high speed chase.  It does not involve the offender/suspect, but a passenger.  Jeffrey Braswell was a passenger in a car that took Boynton Beach police officers on that chase.  When the car was eventually stopped, Mike Brown yelled for the driver and passengers to raise their hands and get out of the car.  However, Jeffrey Braswell had his seat belt fastened and being afraid of lowering his hands, did not exit the car.

Mike Brown decided to take Jeffrey Braswell from the car.  There was nothing wrong with that.  However, after doing so, he beat Jeffrey, including using his gun to strike. 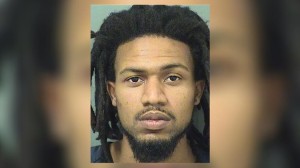 Jeffrey Braswell before he was beaten. 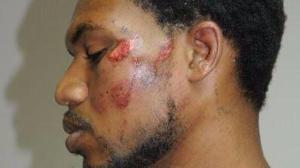 Jeffrey Braswell after he was beaten.

Mike Brown was with officers Justin Harris and Ronald Ryan who were federally charged with deprivation of rights.   Jeffrey Braswell, then 25-years old, was arrested on a misdemeanor charge of obstruction or resisting arrest without violence and in their initial reports, filed shortly after the incident, they made no mention of punching or kicking him.  About a week later after they found out that the sheriff’s office turned over video to the Chief of Police, each of the officers made a number of changes to their reports.

Brown initially wrote that he shot Braswell with a Taser stun gun because Braswell did not respond to his orders to get out of the car.  After viewing the video a week later, Brown added that he had bumped the fleeing car to stop it at an intersection and he added that he struck Braswell with his fist.

The officers’ supervisor, Sgt. Philip Antico, has been indicted for helping the officers falsify their reports and making false statements to mislead FBI agents when he was questioned.  The 37-year old Antico has plead not guilty to falsification of records and obstruction of justice.  Jury selection for his trial starts this week.  U.S. District Judge Robin Rosenberg who presided over the trial for the three officers will also preside over Antico’s trial. 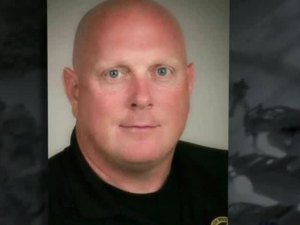 Brown has been on paid leave while the criminal charges were pending. Justin Harris resigned soon after the chase and now works at a gym. Ronald Ryan was fired in 2016 after he was found unfit for duty in an unrelated matter.

The trial for Brown, Harris and Ryan started on October 30, 2017 with jury selection.  On Thursday, November 9, 2017, the jury found Mike Brown guilty of violating Jeffrey Braswell’s constitutional rights by using excessive force and also convicted Brown of using a police-issued firearm to strike the passenger.

Justin Harris and Ronald Ryan, were cleared of all charges, including falsifying records to cover up the beating.

Brown faces a sentence of up to 15 years in prison.  None of the online news sources I checked gave a sentencing date for Brown.