Michael Tyree was 31-years old when he died on August 26, 2015.   He was bi-polar and was arrested for misdemeanor theft and drug possession. Tyree was jailed in a section of the Santa Clara County Correctional facility that is reserved for inmates with special needs.  There, he was beaten with the coroner finding the cause of death as internal bleeding due to blunt force trauma.  There were lacerations to Michael’s liver and spleen, which was nearly severed in half.  Michael was found in his cell naked and covered in vomit and feces. 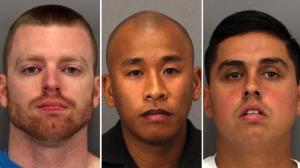 Their trial began on March 22, 2017.  Prosecutors relied on witness testimony to paint the correctional deputies who enjoyed physically attacking inmates.  Text messages between the guards was presented into evidence.

The jury began deliberating on May 25, 2017.  On June 1, 2017, the jury hung on the assault charges, but found Farris, Lubrin, and Rodriguez guilty of second degree murder.

The guards now face a minimum sentence of 15 years to life in prison with the possibility of parole. KTVU’s legal consultant Michael Cardoza said the three would have to serve at least 15 years in state prison before they would be eligible for parole.