On April 12, 2015, Freddie Gray was taken into custody by Baltimore police officers Edward Nero and Garrett Miller.  Freddie sustained a spinal injury in a police van ride and died on April 19, 2015.  Officer Ceasar Goodson was driving the van.

WBALTV reports that Lt. Brian Rice, Sgt. Alicia White and Officer Caesar Goodson have been suspended, pending termination.  They were found to have failed to follow policies for seat-belting Freddie Gray. 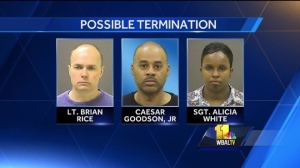 Officer William Porter, whose trial resulted in a hung jury, faces no punishment.

On July 29, 2016, charges were dropped by prosecutors after a jury deadlocked on charges against Porter, and a judge acquitted Rice, Goodson and Nero.

The officers can accept the recommended punishment or choose to dispute the charges.

“Justice is always worth the price paid for its pursuit. This case has always been about providing justice for an innocent 25-year-old man who was unreasonably taken into police custody, severely injured while in police custody, and died due to a lack of care. If today’s news is accurate, I am relieved to know that a majority of those involved will be held administratively accountable for their actions. And, while nothing can bring back Freddie Carlos Gray, Jr., I pray that today’s announcement brings some closure to his loved ones, the City of Baltimore, and the dedicated members of the Baltimore Police Department.”

Baltimore’s police union denounced administrative charges being brought against the five officers, saying the cases will “do nothing more than perpetuate a police force hesitant to exercise judgment when interacting with the public.”

← Manchester: Explosion in Ariana Grande’s Concert Leaves 22 Dead, Over 50 Injured
Ben Carson Says ‘Poverty Is a State of Mind’ →
<span>%d</span> bloggers like this: