Kameron Teel is a substitute teacher.  He is also a former high school soccer star. Kameron set a record for goals scored at Gloucester Catholic High School in Gloucester City and he also played at Immaculata University. Kameron was a scholarship soccer player for La Salle University, as well as a judo and soccer coach/trainer.

On June 24, 2016 in Glassboro, New Jersey, 26-year old Kameron was riding his bike through a borough park.  Glassboro Police Sargent Dan Eliason yelled for Kameron to get on the ground.   What happened next led to a lawsuit filed by Kameron.

“The suit claims that Kameron was laying on the ground, complying to police orders, when Eliason put his knee on Teel’s back, making it difficult for Teel to breathe and causing extreme pain.

Teel alleges he was pepper-sprayed and handcuffed. After leading him to a police vehicle, an unidentified police officer allegedly “slammed” Teel’s head into the hood. After seeing the damage to the vehicle, the officer allegedly told Teel he would be charged with destruction of governmental property.

Teel was also injured when he was bitten numerous times on his legs and hands by the police K-9, he claims in the lawsuit.” 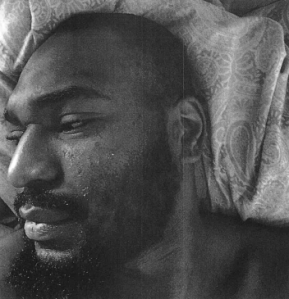 Photos of Kameron Teel’s injuries were included as exhibits accompanying the lawsuit.

At the time of his arrest, police were seeking a suspect in the park for drug activity.  The suspect was described as a Black male, approximately 13 years old.

The police say that they mistook the 26-year old with a full facial beard for the 13-year old suspect.

Kameron had no prior arrests and the charge of destruction of government property was dismissed.

Kameron is represented by lawyer D. Wesley Cornish of Philadelphia, who says that the borough has not provided police video of the incident.

A previous post on this blog reports the findings of a study conducted by Phillip Atiba Goff and Matthew Christian Jackson of the University of California, Los Angeles; Brooke Allison Lewis DiLeone of the National Center for Post-Traumatic Stress Disorder, Boston, Massachusetts; Carmen Marie Culotta and Natalie Ann DiTomasso of the University of Pennsylvania.  Their study found that Black boys are seen as less “childlike” than their White peers and that the characteristics associated with childhood will be applied less when thinking specifically about Black boys relative to White boys.