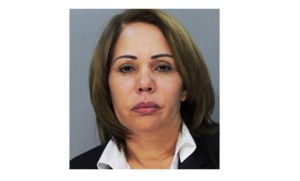 Fior Pichardo de Veloz is a lawyer.  She is also a local elected official in the Dominican Republic.   In November 2013, she flew into the Miami International Airport in Florida to witness the birth of her grandchild.  She was taken into custody on a federal, 1988 warrant for a drug charge in a case that she thought had been resolved.

That was two years ago, and on September 13, 2016, Fior filed a lawsuit in federal court; not because of the mix-up with the warrant, but because a nurse at the Miami-Dade jail assumed that Fior had been born male and had her placed in a general holding cell with 40 men.

According to her lawyers, Fior was initially placed into a jail cell as a woman, but a nurse alleged to evaluating her for exhibiting “non-traditional male characteristics.”  The nurse alleged that she determined Fior had male reproductive organs and she was then sent to Metro West Detention Center, a male-only facility.

Fior wrote a handwritten complaint to the Department of Corrections stating;

“I feel offended because they have offended my integrity as a woman …doubting me if I have changed my sex and (I) take off my clothes many times and ask me why I have done it. (I’m) telling them no.”

In other words, even after taking off her clothes to show the nurses that she is a woman, they insisted that she is transgendered.  They appeared more concerned with humiliating Fior by asking her why she transgendered from male to female than considering her safety. While researching for this report, I found no reports that the Florida Dept. of Corrections did anything about Fior’s complaint.

Lawyers for Fior Pichardo de Veloz announced the federal lawsuit, saying she was “taunted for more than 10 hours” by male inmates. Fior repeatedly told jailers she was married with three children and had never gotten a sex-change operation.  According to the lawsuit, as a correctional officer was placing her in the cell, he said to her in Spanish, “Suerte si te veo viva manaña” which translated, means “You’ll be lucky if I see you alive tomorrow.”

The 10 hours left Fior shattered.  At one point she urinated on herself to avoid using the toilet in front of the men.  Her family wasn’t able to find her for hours because the jail’s staff was looking for a woman. Once they discovered she’d been placed in the male cell, the family told guards she was not a man. The guards then had two nurses examine Fior, who determined that she is a woman.

Attorney David Kubilium said that Fior was sexually harassed and threatened with rape.  Fior says that she has suffered continued physical and psychological damage from the incident, and she has been under the care of a psychiatrist.

At the time she was detained at the Miami-Dade jail, Fior was 50-years old.  She had been married to her husband for 32 years.

NBC 6 exclusively obtained reports that a medical nurse who examined Fior inside the Turner Guilford Knight Correctional Center in Miami-Dade after her Nov. 4 arrest somehow came to the conclusion that Fior was a man. One corrections form has an M in the block indicating gender, even though her arrest report lists her as a female.

The American Bar Association Journal has more on this story and a recent video interview with Fior from the Dominician Republic.  You can watch it at this link.

One of the things that I desire is that people with authority who can abuse it and cause harm to others learn empathy.  What if it were them; their wife; daughter; sister; niece; mother; grandmother?  Would they want their relatives treated that way?

What if Fior had totally transgendered as the nurse thought?  It would still be dangerous to place her in a cell with men because physically, she would be a woman.

Our society should have no place for professionals, such as that nurse, to be biased.  As we saw with Kim Davis, the Rowan County Kentucky Clerk, when people cannot do their jobs because of personal biases, they violate the constitutional rights of others.  The guard who told Fior that she would be lucky to be living the next day should not use his position to intimidate with such fear.  Such intimidation clearly conveys that the guard was willing to stand-by as Fior was murdered. That fear was real for Fior.  Some people would not be able to hold themselves together for 10 minutes after hearing that, much less 10 hours.

Hopefully, Fior’s lawsuit can cause some needed changes in Florida’s Department of Corrections, including changes for how their personnel treat real transgendered inmates.

← Kaepernick, Black Lives Matter, and Trigger Happy Cops
Officer Who Killed Terence Crutcher Used Illegal Drugs and Had Restraining Order Against Her →
%d bloggers like this: