Desegregation of West End High School in Birmingham, AL was initiated in September of 1963. Patricia Marcus, shown in the following AP wire photo, was one of the two Black students enrolled there that September. The photograph is captioned with these words:

“Birmingham, ALA., Sept. 11—CAR WINDOW SMASHED—One of two Negro girl students who desegregated West End High School in Birmingham sits in car and is partially framed by broken auto window. A rock was hurled through the window as the Negro girls were leaving the school area after class this afternoon. (APWirephoto) 1963” 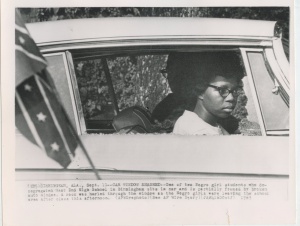 As I look at this September 11, 1963,  photo of Patricia Marcus, I see a student who just wants to make it home safely after a thrown rock has shattered the window where she sits. Yet, at the same time, I see her in her eyes her strength and determination amidst what must have been hurt, anger, and shock. Associated with the hateful deed just committed against her is the Confederate flag in the left foreground.  Historically that symbol has appeared, all too often, at the scenes where racial violence has been committed.  All too often it announces the presence of hearts starved of compassion, open-mindedness, and understanding because of white supremacist indoctrination.

Just the day before (September 10, 1963),  a white student had been photographed wearing a sign on his shirt that read “Keep West End White.” On either side of the word “Keep” appeared two Confederate flags:

Two weeks before the rock was hurled at the car window where Patricia Marcus was sitting, Martin Luther King had given his “I have a dream” speech at The March on Washington.  Four days later, on September 15, 1963,  the terrorist bombing by white supremacists of Birmingham’s 16th Street Baptist Church savagely took the lives of four precious girls…Adie Mae Collins, Cynthia Wesley, Carole Robertson, and Carol Denise McNair.

“A photo from a white supremacist website showing Dylann Roof, the suspect in the Charleston, S.C., church shooting.” (quote from NY Times article)

I still remember the cheers and expressions of gratitude when Bree Newsome removed the Confederate flag from the flagpole at the state capitol of South Carolina.  In the video of that day, Bree Newsome shouted

“You cannot get to me with hatred and oppression and violence.

I come against you in the name of God.

This flag comes down today.” 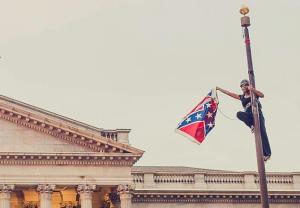 May this symbol of hate and racism not only be removed from all public places but also from hearts of those individuals still filled with racial bigotry.  May I and all other White citizens of this country recognize the privileges that we unfairly gained as a result of the subjugation, discrimination, and repression of members our fellow Black citizens.   I pray that I and others can repair the damage caused by the heinous practices of both the past and the present.