The six police officers are charged with various crimes in the death of Freddie Gray in Baltimore, Maryland on April 19, 2015. Freddie died a week after he was injured while being transported in a police van to the jail.  An autopsy found that Freddie’s spine was 80 percent severed.

Judge Barry Williams will hold a scheduling conference this afternoon, September 29 2015, to determine when and in what order the officers, who face charges ranging from second-degree assault to second-degree “depraved-heart” murder, will be tried. The first trial is tentatively scheduled for Oct. 13, 2015.

Earlier this month, Judge Williams ruled that each officer will get his or her own trial. The state anticipates that they will need between three and five days to present their case against each officer, and intend to call at least one officer to testify against the others. 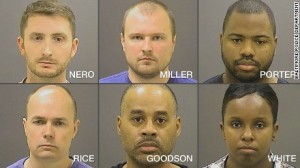 One reason for not having one trial for all of the accused is because they gave investigators conflicting statements. Defense lawyers told the court that the conflicting statements could create problems in a joint trial because it would pit the defendants against each other, depriving them of the right to confront his or her accuser and deprive them of the right to not testify in their defense.

Some of the defendants allege that they thought they were giving statements as witnesses, rather than suspects.

The Baltimore Sun also reports that in the documents they examined, White gave a statement that when she asked Freddie what’s going on, that he didn’t say anything. Rather than think he was unable to talk because of his injury, or even unconscious, she assumed that he was being uncooperative. In her statement, White recalled Porter saying that Gray’s medical problem was “jail-itis” — a reference to not wanting to be confined. She said none of the officers informed her that Gray had asked for a medic.

Without the city nor the defendants admitting any wrongdoing, the city of Baltimore has agreed to pay $6.4 million to Gray’s family to settle civil claims.