According to the Orlando Sentinel, Seminole Circuit Judge Melanie Chase didn’t elaborate on her ruling but said, “This court finds there is no disputed issue of material fact and that the defendant, Roseanne Barr, is entitled to judgment as a matter of law.”

Robert Sr. and Gladys Zimmerman, parents of George Zimmerman, sued Roseanne Barr for tweeting out the address to their home.  This happened while George Zimmerman was in hiding after killing unarmed 17-year old Trayvon Martin, and before George’s arrest.

Attorneys for Barr argued that she cannot be held culpable for republishing already publicly available information. To make the case, they showed pages from a phone book found in a library that contained the address.

There is controversy and misunderstanding regarding posting the personal information of others on the internet, without consideration for how the court determines intent.

“Robert Zimmerman felt the tide of public opinion going against his son and so he injected himself into the public debate. The point here is that this is not private information — it’s public information — and these are not private citizens for purposes of these stories.”

Attorney for the Zimmerman’s, David Heil, accused Roseanne of seeking to incite  “vigilante justice” by calling crowds to rush the address. 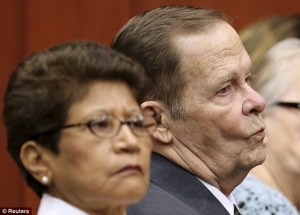 Testimony revealed that the Zimmerman’s left their house and received death threats well before Barr’s tweet.  While their case was pending, George Zimmerman lived at the same house where he was arrested for domestic violence. That case was later dismissed when the woman refused to cooperate.

Meanwhile, no updates have been reported by the media on  George Zimmerman’s lawsuit against NBC that was dismissed, and that he has filed to appeal the dismissal.