What’s good Blackbutterfly7? Santiago here,  checking in with an any topic discussion thread.  Feel free to share your thoughts as to recent events that may or may not have been covered by us recently.

As for myself, it’s been a pretty busy week.  Our house has sold and we will be moving out by the end of August. Court took place this week.  The defendant entered a plea of not guilty  Trial is set for September 8th.

My Soap Box For Today 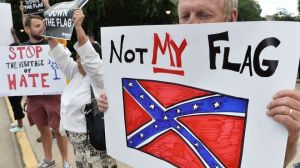 South Carolina finally did what should have been done years ago in taking down the Confederate Flag.  (Really, it should have never been flown after the Civil War.) The flag’s removal has caused some to go off the deep end with their arguments that the flag does not represent oppression and bigotry, but rather their history and southern pride.

As slanted as those claims might be, here is what that flag represents to me.

How many times have we heard the nonsense that “This Flag represents our history”?

Maybe they have a point and are really proud of their history and what their forefathers did to people of color.   I mean,  I’m sure Hitler offered no apologies for his actions in committing genocide against the Jewish people and others.

Can you imagine how the world would react if Germany decided to raise the old Nazi flags and justify it by saying its “our history”?

The same folks who support the Confederate flag would be going nuts if that happened.

For me,  it represents the history of a nation divided, so much that it took a civil war between Americans to resolve the dispute between the North and the South.  When we think about it, the South literally fought to keep people of color enslaved.  That’s  pretty sickening considering that some people from the south run around talking about how bad other nations treat their own people while at the same time, they treat fellow Americans no different.

Of course we have heard from “Southerners” who say there were a lot of African Americans who fought for the south.  My response to that is simple — I am pretty darn sure they didn’t have much of a choice.

In recent times,  that flag has been used to represent hate, Neo-Nazis, White Supremacist.  Even Neo Nazis in Germany use that flag as a symbol of hate and nothing more. Let’s not pretend that it’s about a history of pride because it is not.

If history was so important to Confederate flag supporters, then they should have no problem with a Mexican flag on every capital and government building in the southwestern states.  Trust me, they wouldn’t go for that one bit, even though it is our history.

The only history it represents is a time period of hateful ideology that those who support this flag would love to see return. That is NOT going to happen. The South surrendered. Wave the white flag of surrender.

The remaining Southern States should follow suit.  This is not a 1st Amendment issue as that only applies to individuals and NOT a government entity.  Recently, California voted on a bill to ban the Confederate Flag with a 66-1 vote.

I am amazed and happy to see South Carolina stand up and make this change,.  It’s just a shame that it took so long for them to do so, but I’m not complaining.  It’s the right thing to do.  It is also a respectable way to honor the 9 who lost their lives at the hands of the pathetic little racist worm Dylann Roof , who should have never been allowed to legally purchase a gun.

In closing, I want to send a shout out and a huge thank you to Bree Newsome who took it upon herself to do something that should have been done long ago, to do something that simply was the right thing to do for South Carolina and the rest of America.  My hat is off to Bree for her bravery, and we pray that the charges against her are soon dismissed.

What’s Your Opinion About Donald Trump?

Let us continue moving  forward loving one another.