Freddie Gray Died From Injury Like Diving Into Shallow Water

Freddie Gray, 25, was arrested on April 12, 2015 following a foot pursuit by Baltimore police officers. He was placed in the back of a police van that stopped several times, at least once where Freddie’s legs were shackled. He was unresponsive when the van arrived at the police station, and died a week later at a hospital. His death sparked protests over police brutality.

The Baltimore Sun obtained a copy of the Freddie Gray’s autopsy. The medical examiner concluded that Freddie suffered a single “high-energy injury” that was like those seen in shallow-water diving incidents.   The medical examiner concluded that Freddie’s death fits the medical definition of an accident, but ruled it a homicide because officers failed to follow safety procedures “through acts of omission.”

Freddie was loaded into the van on his stomach. The medical examiner speculated that Freddie got to his feet and was thrown into the wall during an abrupt change in direction. He was not belted in and his wrists and ankles were shackled, which made him “at risk for an unsupported fall during acceleration or deceleration of the van.” 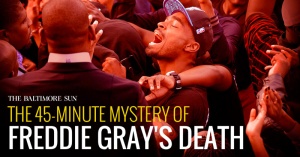 There appears to be more than several videos of the police van as it made stops, and the officers’ actions at each stop. The medical examiner’s report addresses the videos, giving some explanation into what happened during the 45 minutes from when Freddie was arrested, until he was taken to the hospital.

The injury to Gray’s spinal cord would have caused loss of function of his limbs, and would have “direct effects” on his ability to breathe, according to the autopsy.

Police had said in a court filing that the second passenger reported hearing Gray banging and kicking through the metal divider before the fifth stop. Allan said that would not have been possible given Gray’s injuries, but he may have been suffering a seizure at the time, which could have caused the noise, she said.

All of the officers indicted have plead not guilty.  Their trials are scheduled to begin in October.

← An Uneasy And Fearful Society – A Comment By Two Sides To A Story
African American Family Records From Era of Slavery to be Available Free Online →
%d bloggers like this: