Balitmore’s Gag Order Struck Without Prejudice And Other Stuff

It’s no big deal, but because of some people promoting it as a lost for Baltimore’s State’s Attorney Marilyn Mosby, I thought it important to write this so those interested can discern fact from ignorance.  It’s easier for me to understand the structures of courts than how Baltimore has its own State’s Attorney because in most states, State’s Attorneys are elected to represent a county and not a city.

Each state has its own court structure, and that structure can differ from state to state. For example, California has Superior Courts that in other states, are considered Circuit Courts. Pennsylvania has courts of Common Pleas, Commonwealth Courts, Superior Court, and a Supreme Court. In Maryland, there are District Courts and Circuit Courts. District Courts are courts of limited jurisdiction.

The jurisdiction of the District Court is concurrent with that of the circuit court in criminal cases that are classified misdemeanors and certain felonies, in which the penalty may be confinement for 3 years or more or a fine of $2,500 or more. The District Court does not conduct jury trials.

The Circuit Court for Baltimore City is a State trial court of unlimited jurisdiction. It handles all types of cases and is divided into four main divisions: Family, Juvenile, Criminal, and Civil.

This photo provided by the Baltimore Police Department on Friday, May 1, 2015.

The charges against the six Baltimore police officers in the death of Freddie Gray were filed in the District Court. It is in that court that State’s Attorney Mosby filed a motion for a gag order. However, the officers were indicted and the cases transferred to the Circuit Court on May 21, 2015.

The Baltimore Sun uses the word “struck” in its report regarding the motion for a gag order. That’s important. To “strike” a motion is not the same as denying it. Striking is when the court has no jurisdiction, and can enter no judgment. In other words, the judge cannot deny nor grant the motion. He can’t say if the motion has merit and law to grant or deny it. It would be like going to a dentist for a diagnosis for a brain injury based on x-rays taken of the brain.  The dentist cannot give such a diagnosis. It would be completely dishonest to say that the dentist denied that there is a brain injury, but that is what some folks allege with Mosby’s motion for a gag order.

Mosby’s office is stern that they are not going to litigate the case in the media, nor discuss their trial strategy. The protective order that Mosby seeks, commonly called a gag order, is to prevent the release of Freddie’s autopsy report and other sensitive documents to the public. Emphasis: TO THE PUBLIC. It does not prevent the release of that information to defense attorneys. However, that is the spin already made by an attorney for one of the officers who accuses Mosby’s office of trying to hide something. Defense attorneys will be provided with all discovery, but a gag order would prevent them from releasing it to the public.

One of the things that we experienced with the George Zimmerman trial is that there is a segment of the public, particularly on social media, who will use discovery, such as autopsy reports, to place the victim on trial. They even misrepresent the contents, or present it partially to paint the victim as a burden on society deserving death.  That makes it more difficult on the court to select a jury because it has to be aware that such information can taint the jury pool, even if potential jurors do not read social media.

Those people who qualify for Section 8 vouchers must have income. There are special circumstances, but most Section 8 voucher programs require that the income is “earned” or received from social security.

We have recently read reports that those earning minimum wage 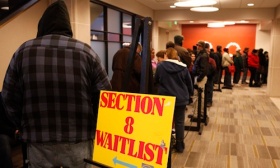 cannot afford rent. This is the purpose of Section 8, so that those working but not earning enough to pay rent for decent housing can have their rent subsidized by the federal government.  It should be noted that most of the agencies that administer Section 8 housing do not do so continuously. Some have very limited funding and have not issued Section 8 vouchers for years. There are people who have been approved for vouchers who have been on the waiting list for years.

Section 8 participants do not receive money from HUD. Rather, HUD pays rents directly to the Landlords. The Landlords receive the financial benefit. They save on having to run credit checks and verify income because the housing authority does that in approving applicants for Section 8 vouchers.   When applying for Section 8, criminal background and credit checks are conducted. The Landlord only needs to verify the voucher, contact the agency that administers Section 8, and pass inspection.

An important function of Section 8 housing is that it eliminates crowded conditions. Most cities have ordinances and some states have laws regarding the number of bedrooms necessary based on the number of family members. For example, a couple that has two children, one boy, and one girl, will qualify for a 3-bedroom apartment because the children are different genders requiring a separate bedroom.

There are Landlords who run businesses renovating houses for the specific purpose of renting them to Section 8 tenants.

If anyone thinks that it’s easy qualifying for Section 8 housing, they should read the rules that agencies must comply with to determine eligibility.