Hi!  Santiago here. As announced last week, I will be doing a weekly open discussion thread. Share whatever is on your mind, current or past events. Keep in mind not everything has to be news related here, talk about your week or your plans for the weekend or any suggestions you may have for the blog.

A big thanks to participants and subscribed followers.

My personal thoughts, is anybody allowed to stand their ground with this clown?  I think the only thing that’s going to come of this is a waste of tax payer dollars, but it will be fun to watch George take the stand if he really intends on this going through…

It is  funny to see some Dunn supporters stand up for George in this regard. Apperson thought he  saw George waive his gun. Dunn swore up and down Jordan had a gun… even though no gun was ever found in the SUV that Dunn shot up. George on the other hand, did indeed have his gun. But, it’s funny to sit back and watch the hypocrisy flow from the nutters.

Still gets me that basically these criminals were told to just have a seat and wait until someone comes over to cuff them as if there was some sort of honor system.

NEW VIDEO IN THE DEATH OF FREDDIE GRAY

The Baltimore Sun did some investigative work in the death of Freddie Gray.  Turns out that the police removed a surveillance video.  The Sun recovered it.  It shows one of the van stops, and that police shackled Freddie and threw him into the van head first.

Let me just add this — those who are out there throwing up that police lives matter — nobody says their lives don’t matter, but I can tell you the difference between you and I… the difference is I have never supported someone who has been arrested and charged for homicide.  So much for your respecting the law nonsense that you claim to do. 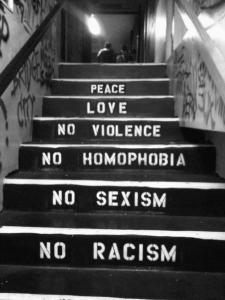