Cop Involved In Killing of Freddie Gray Had Been Suspended Twice 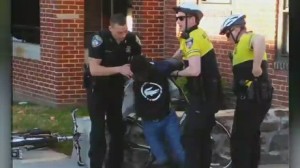 Lt. Brian Rice, who was the first to make eye contact with Freddie Gray, has been suspended twice from the Baltimore police force for personal reasons, including mental health and an protective order.

In 2012, Lt. Brian Rice was hospitalized for a mental health concern. It happens. People have circumstantial and other types of depression and mental health issues. The main thing is that they seek and receive help. Another main thing too, is that they re-evaluate their profession and if necessary, go into another line of work.

Lt. Brian Rice has a son with Karen McAleer.  The Associated Press reached out to talk to Karen McAleer, but she declined to speak. In 2012, McAleer contacted police for a welfare check on Lt. Brian Rice. Allegedly, Rice said he “could not continue to go on like this” and threatened to commit an act that was censored in the public version of a report obtained by the AP from the Carroll County, Maryland, Sheriff’s Office.

On the condition of anonymity, a person familiar with the police department told AP that Rice was suspended twice, once in 2012 and again in 2013. The incidents described in the sheriff’s report and court records involving Rice’s personal problems include allegations of concerns about self-control and judgment. In 2013, McAller filed a complaint alleging that Rice removed a semi-automatic handgun from the trunk of his personal vehicle and threatened her.

Andrew McAleer, Karen’s ex-husband, filed a complaint against Rice in 2013. Andrew is a former Baltimore firefighter. Andrew alleged that Rice threatened him and sought the court for a protective order. A judge granted the protective order but allowed it to expire after one week. Rice was placed on administrative leave as a result of Andrew’s complaint.

Attorney Michael Davey who represents Rice, did not respond to phone calls from the AP. Earlier this week, he dismissed the significance of Rice’s personal life problems and hospitalization for mental health concerns.  They should give suspects the same consideration.  As it stands now, there are rumors that Freddie’s family received a settlement for lead poisoning, and some are passing a rumor that Freddie had back surgery the week before his deadly arrest.

A business surveillance video has been revealed, that shows that the police made an additional stop while Freddie was in the van.  That stop was in addition to the one where they shackled Freddie’s legs, and the one where they picked up Donta Allen.

Donta Allen, the other man in the police van, spoke out himself. Donta explained that he did not say that Freddie hurt himself.

← PA Police Officer Charged With Criminal Homicide
6 Officers Charged In The Death of Freddie Gray →
%d bloggers like this: