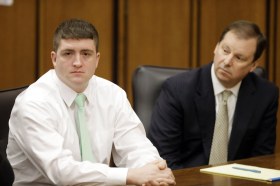 Officer Brelo (left) with his attorney

The incident, as determined by a federal investigation.involved 37 percent of the Cleveland Police Department, consisting of 62 police vehicles and more than a hundred officers. One however, now faces trial for two counts of voluntary manslaughter because he stood on the hood of an unarmed suspect’s car and fired 49 shots using his Glock 17.

A Cuyahoga County grand jury indicted Officer Michael Brelo and found charges against five supervisors for dereliction of duty. Brelo’s trial is scheduled to begin today, April 6, 2015. He has chosen to have a bench trial.

It happened on November 29, 2012. Timothy Russell was driving his Chevy Malibu and Malissa Williams was Timothy’s passenger. Cleveland police officer John Jordan stopped Timothy Russell for a signal violation. Jordan had seen Timothy and Malissa outside the Lutheran Metropolitan Ministry’s men’s homeless shelter, which is a spot that the cops refer to as “the wall” because it is known for drug dealing. Officer Jordan stopped Timothy for a signal violation, but suspected Timothy and Malissa of drug activity. Timothy took off.

“To state the obvious, this chase could have ended without tragic results if Timothy Russell had simply stopped his car in response to the police pursuit. Perhaps the alcohol and the cocaine in his system impaired his judgment. We will never know.”

Timothy’s Malibu had a history of engine woes, and as he drove away from officer Jordan, his car backfired just as he passed another police vehicle near the city’s jail. The officer at that vehicle mistook the backfire for a gunshot.

Cleveland Police Officer Vasile Nan dispatched on the police department’s radio, “Popped a round off right as he drove by us. Use caution. Occupants are armed .”

For the next 22 minutes, Timothy Russell led police on a chase reaching speeds of 100 mph. When he pulled into the staff parking lot of the Heritage Middle School, he ran into a dead end. Police officer Wilfredo Diaz took the first shots at the Malibu. However, the other officers in the pursuit did not know it was Diaz and assumed it was Timothy and/or his passenger. It resulted in a situation of cross-fire where police shot into other police cars. 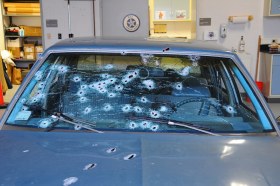 Special Prosecutor Tim McGinty put out a statement alleging that Brelo pulled the trigger on the kill shots;

“After more than 100 shots were fired at Mr. Russell’s car, it was trapped by police cruisers in a narrow lane and came to a full stop. All officers at the scene saw fit to cease fire. Then Officer Brelo started shooting again and fired at least 15 shots, including fatal shots, downward through the windshield into the victims at close range as he stood on the hood of Mr. Russell’s car.”

Regarding the actions of the police that night, DeWine stated,

“Lack of supervisor command and warnings … resulted in an overall failure to control the situation” and the large number of vehicles involved contributed to a crossfire situation … that risked the lives of many officers. It is, quite frankly, a miracle that no law enforcement officer was killed. Clearly, officers misinterpreted the facts. They failed to follow established rules.

Among the lack of supervisor command and control is that only 3 of the 62 police cars that took chase had been authorized to do so. There was confusion on the radio, causing more than 90 police officers to join pursuit without the requisite clearance by dispatch.

63 officers have been suspended, one supervisor was fired, and two more supervisors were demoted.

In December 2014, the Department of Justice released its report finding that the City of Cleveland and the Cleveland Department of Police, engage in a pattern of practice of conduct by law enforcement officers that deprives individuals of rights, privileges, or immunities secured by the Constitution or laws of the United States.

The families of Williams and Russell each reached $1.5 million settlements with the city.

If you prefer to hear/watch the DOJ’s findings as opposed to reading it, the video is the second below.