When I first heard about this, and that citizens were organizing to protest, it did not take me by surprise. Madison, Wisconsin is known as a college town.  People travel from Illinois to Madison for health services. Madison is known for its veteran’s and research hospitals. It is a city where many residents are professionals and college students.

Fort McCoy’s Total Force Training Center is about a two-hour drive from Madison, and it is not unusual to see military personnel and their families use Madison as a meeting place and to socialize. Dane County Regional Airport is located in Madison, WI. When I visited there, I found diversity. There are no second looks on mixed race couples.

What am I saying? When Madison police officer Matt Kenny killed unarmed 19-year old Tony Robinson, he not only killed an unarmed person, but he also tarnished Madison’s reputation as the city in Wisconsin that seeks positive changes for its state. Officer Kenny did this in a state that does not have the death penalty. Understand that to mean that there is no crime in the State of Wisconsin where judicial punishment is death. In 1853, Wisconsin was the first state in America to permanently abolish the death penalty for all crimes.

After Jeffrey Dahmer’s crimes became public knowledge, there was a push in the Wisconsin legislature to reinstate the death penalty. Between 1991 and 1996, 22 Bills were introduced for reinstatement. None made it through legislative committees.

When an unarmed person is killed by the police, and social media takes off to justify the killing of a “thug,” the people of Madison take exception to that. They do not kill their own even when the person is convicted for murder. 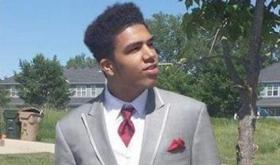 Tony Robinson was a recent high school graduate and was headed to the Madison Area Technical College, where he wanted to get a business degree. However, he also has a criminal record. In April 2014, Tony was alleged to committing home invasion with 4 others, one armed with a shotgun. In October 2014, Tony plead guilty to armed robbery and was sentenced to 120 days in jail, which was stayed by the judge who gave Tony 3 years of probation.

What we have here is a situation where Tony, unarmed, was sentenced to death by Officer Kenny because he and Tony got into a fist fight, in a residence where Kenny forced entry.   And now, those who do not understand the spirit of Madison, Wisconsin justify Kenny’s killing of a thug. They should listen to Chief Koval and the Mayor of Madison, Paul Soglin, who went to city hall where protesters gathered. Mayor Soglin made the statement to WKOW;

“We’ve got a family that’s really hurting. And we’ve got a city and neighborhood that’s feeling pretty well hurt itself.”

Madison Police Chief Mike Koval said at a news conference that an officer responded to 911 calls reporting a “subject” who was “jumping in and out of traffic, dodging cars and the like.” that had been responsible for a battery. Kenny was the responding officer who went to an apartment where Tony had gone.   Kenny has stated that when he arrived at the apartment, he heard what sounded like a disturbance inside. Kenny forced entry into the apartment.

Chief Koval said once Kenny went inside the apartment, the victim “assaulted my officer and in the context of mutual combat, the officer did draw his revolver and subsequently shot the subject.”

According to CNN, Chief Koval confirmed that Tony was unarmed and stated;

“We have to be clear about this. He was unarmed. That’s going to make this all the more complicated for the investigators, the public, to accept, to understand … why deadly force had to be used.”

Officer Kenny has been with the Madison police department since 2002. He was an active officer with the U.S. Coast Guard for 9 years prior to joining the force. Kenny was taken to the hospital, but was not seriously injured. The police chief said a blood test was taken to determine if alcohol or drugs were in the officer’s blood. Kenny has been placed on administrative leave.

In July of 2007, Kenny shot and killed 48-year old Ronald Brandon who had a pellet gun. At that time, Dane County District Attorney Brian Blanchard said the gun looked genuine, and Kenny was ultimately cleared of any wrongdoing:

This time, Kenny will be investigated by an outside agency, the Wisconsin Department of Criminal Investigation, (DCI) per state law. The law that requires the investigation by an outside agency was a response to the 2012 police involved shooting of 30-year old Paul Heenan. Paul was unarmed and intoxicated. He entered a neighbor’s home mistakenly, and the neighbor told police that she knew him. Stephen Heimsness, the officer who killed Paul, said that he thought Paul was reaching for a gun.

John Heenan, Paul’s father, lobbied the legislature for the law that requires outside investigators to investigate all fatal police shootings, saying that police “wagons were circled” after the shooting to cover-up facts.

John Heenan told 27 News his lifelong confidence in the actions of police officers was close to shattered by his son’s death.

“I used to trust them. I used to not question anything. I question things now,” he said.

The law became effective in 2014. Madison State Representative Chris Taylor co-authored the bill, and stated of the recent killing that she was informed that the Department of Justice’s division of criminal investigation is on its way to the scene.

The people of Madison do more than talk. Whether successful or unsuccessful, they take action.