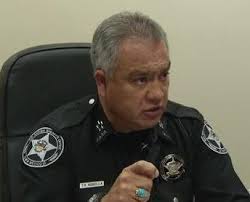 Tommy Rodella and his son, Tommy Rodella, Jr., were indicted on federal charges of conspiracy to violate civil rights, deprivation of rights, brandishing a firearm, and falsifying police documents. Tommy Rodella is Sheriff for Rio Arriba County in New Mexico.

FBI agents arrested the Rodella’s for their role in a March 11th confrontation that left the driver injured.

The four count indictment alleges that Rodella was driving his personal vehicle when he engaged in a high-speed pursuit and unreasonable seizure of the driver who is identified in documents as “M.T.” Rodella was accused of dragging the driver from his car, and throwing him down in the dirt. Rodella’s son told the driver that his father is the sheriff. M.T. asked to see his badge. Documents state that Rodella then pulled the driver’s head from the dirt by his hair, then slammed his badge into M.T.’s right cheek and eye.

U.S. Attorney Damon Martinez for the District of New Mexico, said that both men “acted under the color of law” when they cornered the motorist at a dead end.

Rodella has a history of abusing the authority of his positions. In 2005, then New Mexico Governor Bill Richardson appointed Rodella as a magistrate judge. Rodella resigned a few months later amid criticism, including that he helped secure the release of a family friend who was jailed for drunk driving. The court barred him from running again for judicial office.

As a state police officer, Rodella was disciplined for marijuana use, improper use of a weapon, falsifying official reports, abusing sick leave and using his position for personal gain. He also was suspended for 30 days for firing at a deer decoy that game officers had set up to catch poachers. Rodella served in the state police from 1982 until retiring in 1995 on a disability pension. In spite of his history, Rodella was elected sheriff in 2010.

In the case of violating civil rights,  Rodella’s defense attorney, Bob Gorence, wanted a speedy trial for his client. He stated, “We can’t wait to try this, and I expect an inevitable acquittal and vindication,” Gorence said.

Well, Gorence got the speedy trial, but not the result that he wanted. Today, the jury returned the verdict of guilty. Robella is now looking at up to 17 years in prison. County managers had asked Rodella to resign as sheriff prior to the verdict, but he refused. Undersheriff Vince Crespin will take over for now.