Ferguson Chief of Police, Among Others, Sued for $40 million

The $40 million lawsuit isn’t all. Forgive me for not being present on 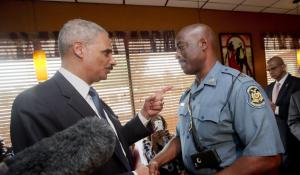 the blog. After hearing about the lawsuit, I began to research to see if I could obtain a copy. What I did find opens the eyes more into the experience of the citizens of Ferguson. When U.S. Attorney General Eric Holder visited Ferguson, Missouri, I read that his interest was not only because of the killing of Michael Brown, but also because of other complaints against the Ferguson police department. One complaint involved the arrest of the wrong party who, when Ferguson police discovered the mistaken identity, beat the man then charged him with destruction of property because he bled on their uniforms.

The U.S. Department of Justice has a division to receive and investigate complaints against law enforcement who violate civil rights under color and claim of official right. I do not know, but highly suspect, that some citizens of Ferguson used that option. What gives me further reason to believe that they did is because the family of a man killed by Ferguson police in 2011, stated that every lawyer she contacted was afraid to take cases against the Ferguson police department, and news stations were afraid to report on the incident.

I can believe that because I live in such a small town where upsetting the apple cart can result in harmful retaliation. People have no option that to depend on government agencies to investigate because local government, lawyers, and news reporters, ignore them.

When law enforcement arrested members of the media during the recent protests, I predicted that their employers would sue the law enforcement agencies. We have yet to see if that happens, but another lawsuit has been filed.

Five people who were arrested in Ferguson, Missouri have accused the police of using “wanton and excessive force,” intentional infliction of emotions distress, negligent supervision, and assault and battery. In their complaint, they allege that the Ferguson and St. Louis County police treated U.S. citizens “as if they were war combatants.”   The arrests happened between August 11th and August 13th.

CNN has not yet confirmed the arrests, but lists them as follows from the complaint;

What I found while researching for the aforementioned lawsuit, was another lawsuit filed on August 19, 2014 by the family of Jason Moore. Named as defendants are Ferguson police officers BRIAN KAMINSKI, MICHAEL WHITE,WILLIAM BALLARD, MATTHEW BEBE, THOMAS JACKSON, the City of Ferguson, Missouri, and the Ferguson Police Department.

The officers are accused of violating Jason Moore’s civil rights by tasing him to death. Since a lawyer for the family declined to comment to the media, I am not going to make the lawsuit available to the public here on the blog. The lawsuit requests a jury trial and does not request any specific amount of money.

The cover-ups, and the ignoring, that has placed the citizens in a position where they have to “suck it up” and continue on without answers, without redress, is the type of oppression that this country should never allow.

Mr. Moore’s sisters and brother are in the following video.

← Ted Wafer’s Attorney Re-Litigates Case To Argue For A Reduced Sentence
St. Paul police violently arrest a black man for sitting on bench, waiting for his children (VIDEO) →
<span>%d</span> bloggers like this: