Juror in Ted Wafer case: “no one believed it.”

A juror in the Ted Wafer murder trial spoke to the Free Press on the condition of anonymity. Ted Wafer was convicted of 2nd degree murder for killing Renisha McBride. Renisha had been in a car accident, was intoxicated, and knocked on Wafer’s door. He opened his door and shot through his screen door with a shotgun, killing the 19-year old. 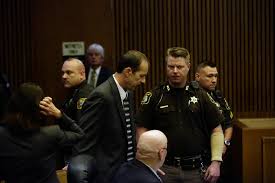 Ted Wafer is taken into custody after the reading of the verdict.

The juror who interviewed with Free Press said that Wafer’s conflicting statements ultimately helped the jury reach its verdict. The jury was made up of 7 men and 5 women. When they went into deliberations, they took an anonymous vote. That vote was that Wafer was guilty, but they still had to decide whether to convict on second-degree murder or a lesser charge of involuntary manslaughter. The juror said that their decision hinged on the evidence.

Wafer is scheduled to be sentenced on August 25, 2014. He has been in jail since the verdict. His attorney has stated that after sentencing, she will file an appeal.

Last week, McBride’s parents filed a wrongful-death lawsuit against Wafer. The suit seeks more than $10 million. Gerald Thurswell, the attorney for McBride’s family, said he doesn’t know what he’ll be able to collect from it, but said he plans to get whatever compensation he can for the McBride family’s loss.

← The Bay Area just got hit with its largest earthquake in 25 years
Michael Brown’s Funeral Live Streamed →
<span>%d</span> bloggers like this: