Peter Rodger’s son, Elliot, went on a shooting spree, taking the lives of 6 people on May 24, 2014.  Elliot wrote angry pieces and taped YouTube videos talking about violence, murder, and his hatred of blonde White women for rejecting him. Among those Elliot killed was 20-year old Christopher Martinez.

“Chris died because of craven, irresponsible politicians and the NRA. They talk about gun rights. What about Chris’ right to live? When will this insanity stop? When will enough people say stop this madness? We should say to ourselves, not one more.”

The two men embraced. This is the picture of what true sorrow, and forgiveness looks like: 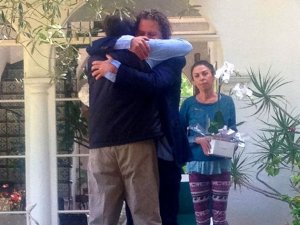 Martinez told ABC News affiliate KEYT-TV, “We plan to work together so other families such as ours will not suffer as ours have. This was a private conversation between grieving fathers who’ve reached common ground.”

In my opinion, these two fathers are like healing ointment to each other. They are serving as a good example for others. This is what works, not the “I’m sorry for the loss of your son” followed with excuses.