← Verdict Watch – Open Discussion – Sat.
Things Are Not Always As They Appear → 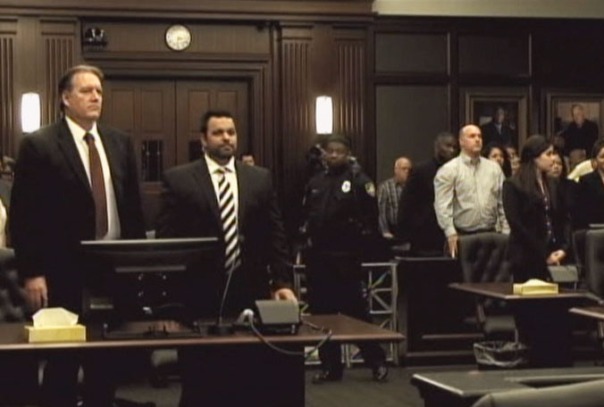 Twelve jurors have found Michael Dunn guilty of 2nd degree attempted murder upon the lives of Tevin Thompson, Leland Brunson, and Tommie Stornes.  Each count carries a minimum sentence of 20 years to a maximum of 30 years.  Sentencing can run concurrently or consecutively.  Some familiar with Judge Healey are of the opinion that he is unlikely to enter concurrent sentences.  That means that Dunn is looking at a minimum of 60 years in prison on the 2nd degree attempted murder convictions.

The jury also found Dunn guilty of shooting a firearm into the vehicle, the sentence of which is a minimum of 15 years.

Lucia McBath, Jordan Davis’ mother, stated that the family has found some closure.  While most would have liked a verdict on the murder charge, a hung jury does not convey disagreement with evidence and facts as much as it conveys disagreement on common sense.  Common sense demands that Dunn’s story cannot be true.  Had it been true, Dunn would have wanted the police to know there was a gun in the SUV rather than giving that story after he was apprehended.

When re-tried, State prosecutors really need to focus on the fact that the police could not search for what they did not know, and they did not know about a purported gun because the defendant chose to flee and not contact law enforcement.

In addition to that, Dunn’s theory that he exercised self-defense whether he reported it or not, does not pass the common-sense test.  Without his reporting that he fired bullets into the SUV, it was an unsolved murder.

As I write this, State’s Attorney Angela Corey is holding a press conference.  As soon as the video becomes available, I shall embed it here.