George Zimmerman – “I’m Above the Law”

Christi O’Connor has released Part 1 of her investigative report on video.  She doesn’t tell us much of what we don’t already know about George Zimmerman, but she does, along with many, ask why.

When watching the video of George Zimmerman destroying Shellie’s iPad, we see people who are not identified and that we did not hear from.  In her recently released video, O’Connor interviews one such person.  He tells O’Connor that George did have a gun on him that day, and that George’s girlfriend, Samantha, placed the gun in her purse to hide from the police.  That man also said that George stated he is above the law. 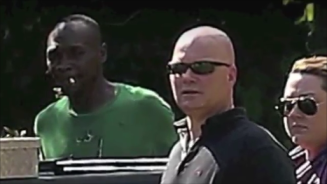 In one frame, we see who looks like Mark Osterman standing with Shellie and the man who O’Connor interviewed. (Hat tip to and correction by Jeff.  The man in this photo is Kelly Sims, Shellie’s attorney.)

Could this confirm what Samantha said about George being alone and no longer having friends?

What O’Connor has ferreted out supports what Shellie said about George believing he is invincible.   She addresses evidence withheld and law ignored in the six months since George’s acquittal in the shooting death of unarmed 17-year-old Trayvon Martin.

Posted on 01/23/2014, in George and Shellie Zimmerman, Justice For Trayvon, Videos and tagged above the law, Christi O'Connor, George Zimmerman, investigation, justice for Trayvon, Trayvon Martin. Bookmark the permalink. 94 Comments.

← Nicole Oulson, Widow Of Chad Oulson, Murdered For Texting…Speaks About Their “Date Night” At A Movie.
Pair jailed for sending abusive tweets to feminist campaigner Caroline Criado-Perez →
%d bloggers like this: